All hands on deck for family business 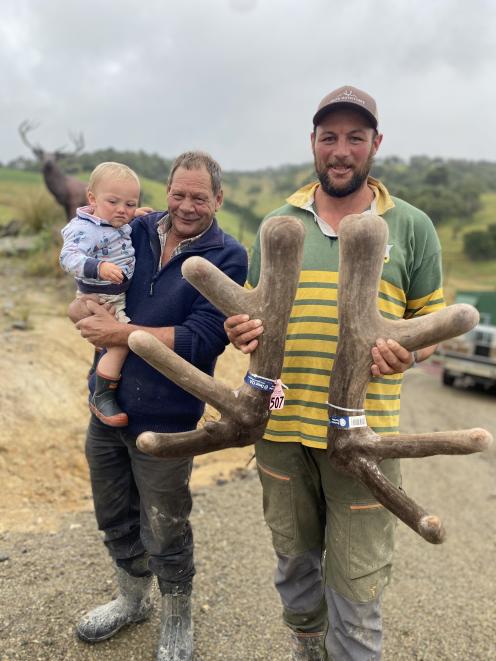 Over the past 40 years, Palmerston couple Nicky and Greg Oliver have worked hard; Nicky is a successful real estate agent in the East Otago area and Greg has juggled a busy fencing contracting business while also building a viable deer unit on the southeast side of Puketapu Hill, just outside Palmerston.

Despite growing up on a sheep farm, Greg said he had always liked deer and they were a good low-input option for him while he was busy fencing.

"When we first started farming, we had 14 acres [5.6ha], six wapiti cows and a wapiti bull, and we just grew from there, really."

Greg and Nicky later bought the 162ha on Puketapu Hill from Greg’s father — they later added another 101ha of neighbouring land followed by 81ha of leased land a short drive away.

The couple’s eldest son, James, and his partner, Rosalind, had recently bought 52ha of neighbouring land to add.

"It’s been a long time just playing a numbers game to get the farm up to a viable deer unit," Greg said.

At the start, the Olivers were farming for both venison and velvet and also growing a few stags out to sell as trophies, but as time had gone on, they had moved away from venison and trophies to focus on velvet.

The fencing had also gradually taken a back seat to make way for the workload on the farm.

"We tend to just stick to local work these days," James said.

"We have three good reliable guys working for us which makes it easier to get away when I am needed out here."

"James has taken over the running of the fencing; I just lay a bit of gear out when I’m needed and bits and pieces like that," Greg added.

They were getting paid well for their velvet product by the Korean and Chinese markets, which used it for its medicinal benefits.

Last year they harvested about 6.5tonnes of velvet and this season they expected about 7tonnes.

"We averaged $135 per kilogram last year and this season it’s looking like it will be back by about $25, but it’s still very good."

Greg and James were big on quality genetics and animal soundness — they would travel the length of New Zealand to purchase quality sires and had paid up to $80,000 for a good stag.

They had also purchased commercial stud hinds, and their investment in genetics was paying off; their velvet yield had grown exponentially year on year, and demand for their sires was very strong.

"We cull our fawns pretty hard and find there is quite a bit of interest in our second cut."

This year they made it into the National Velvet and Hard Antler Competition with Red stag "Benda".

The entry ended up taking supreme champion of champions title, as well as the five-year red section with a head of 13.38kg, and they also won the People’s Choice award.

"We couldn’t really believe it; it wasn’t something we expected to even come close to winning," Greg said.

"We knew it was a good head, but we were blown away by the result."

Interest in Benda’s semen had been strong.

Family input in the farming operation was important to Greg, while James was fulltime between both fencing and the farm.

The couple’s other children were also very much involved.

Daughters Anna and Kate helped out where and when they could — "they are in charge of the CIDR (controlled internal drug release) when we AI the hinds".

Other son Sam, who worked in the underground at Macraes OceanaGold mine, would operate the farm’s 8.5-tonne digger or D5 bulldozer, improving the farm’s access and infrastructure.