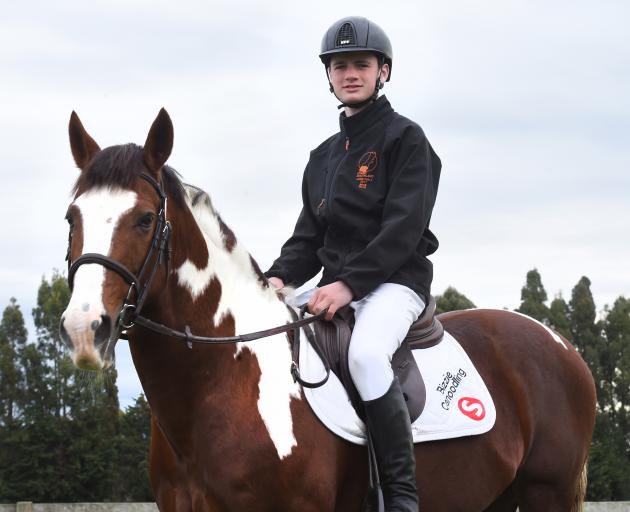 Quinn Coutts, on Bizzie Canoodling, who is off to the Friendship Games in Germany. PHOTO: GREGOR RICHARDSON
There is nothing like trying to outdo your older brother.

But it is also great to follow them after their successful foray on the world stage.

That is the situation Quinn Coutts finds himself in.

He leaves tomorrow to compete in the show jumping at the Friendship Games in Germany.

It will be his first time representing New Zealand.

The meeting attracts a high-calibre field of young riders from around the world.

It is not a bad birthday present for the recently turned 14-year-old, who will follow his brother's exploits.

While the brothers were reasonably competitive, it was good for Quinn to see success was within reach.

While he was a little nervous, he was excited to get going.

He at least had an idea of what to expect.

"Probably quite a tight and strong competition," he said.

"And a good experience hopefully."

Quinn, a year 9 pupil at John McGlashan College, was one of three New Zealanders picked for the team.

The other two were North Islanders.

He had applied for selection, which aimed to acknowledge up and coming riders with the ability to compete at the international level.

Performance was important, but so was sportsmanship.

While away he would also attend a week-long training camp with other international riders.

He has two horses - Bizzie Canoodling and Casa Domani - but will ride a borrowed one in Germany.

It was not something that bothered him.

"It's pretty good getting on other people's horses and riding them, I find it pretty fun."

Quinn has had plenty of success nationally, being placed on the national equitation table, doing well in show hunting, plus having success in eventing and show jumping.

Growing up in horse-riding family, it was a natural move to join the West Taieri Pony Club.

He represents Otago and his school at football.