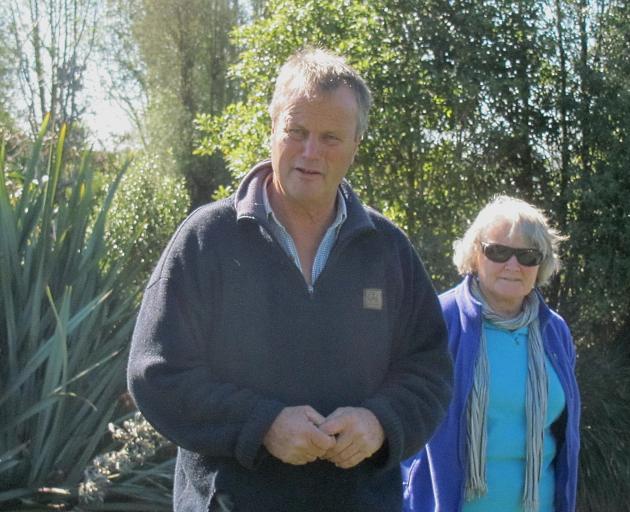 Eiffelton farmer Ian Mackenzie speaks about the endangered mudfish on the family farm to members of FAR's Women in Arable group. Photo: Toni Williams
Arable farmer Ian Mackenzie and his wife Diana, opened their Eiffelton property in Mid Canterbury to Foundation for Arable Research's Women In Arable group, to have a close up look at how farming and environmental protection can work hand in hand.

Mr Mackenzie, a third generation farmer on the Akaunui Farm site, spoke about the efforts to help protect the endangered mudfish which live in the farm's Purakaunui Creek.

The Mackenzies, even after more than 25 years dealing with mudfish on farm, were still learning about the rare breed, as there were few people who knew a lot about them.

The waterway - which winds about 1.5km through the farm and ends with a series of pond sites - is inhabited by mudfish.

Over many years, the wetlands on the farm have been protected and planted to improve water quality and support a healthy population of mudfish and other native species.

It's a peaceful haven for nature to thrive.

Mr Mackenzie spoke about the mudfish on the property, which are one of the biggest populations of the worlds' rarest freshwater fish.

He had live samples for the women to view, caught with a specially crafted cage trap.

A lot of money and a lot of time has gone into the wetlands development, which included five or six hectares along the water system.

''If you have one of the world's rarest fish species on your property you should look after it,'' he said.

''We like it because it's quite nice out here, it's pretty cool.''

There were also wild eels in the creek, and among the wetlands were bird life such as grey teal, paradise ducks, kingfishers, heron, fantails, pukeko and shovelers, which were all ''pretty spectacular, and of course they're living off the frogs, cockabillies and the mudfish that live in the creek, so everything is connected''.

The mudfish on site lay in late winter, and when they hatched in September/October they were clear, and like whitebait, swam openly in large shoal.

As they grew, their colour got darker and they started to hide from predators such as the airborne black shag or water predators like heron, kingfishers and eel.

They hid under the shade of native plants like carex and flax and fed at night.

There were higher levels of mudfish in the creek where eels did not swim.

The Mackenzie family farming operation is diversified, producing grain, seeds, meat and milk - all under irrigation.

Mr Mackenzie, who is a shareholder of a local engineering business, also has experience in governance roles, having served on the boards of several commercial businesses, charitable and community groups, government and NGO groups.

He has served some years on the regional council transport committee, but is better known for his involvement with water and the environment.

Through his various roles with Federated Farmers, at a regional and national level, he has been involved in trying to help develop environmental policies that underpin a rational strategy for water and the environment that does not destroy our social and economic wellbeing.

He was an inaugural member of the Canterbury Water Management Strategy and was part of the process for developing the concept of sub regional zone committees, and served several years on the national Land and Water Forum.

Mr Mackenzie encouraged farmers with patches of land not suitable for farming to consider making their own wetland haven so they were able to ''do something else with the land and get pleasure from it.''