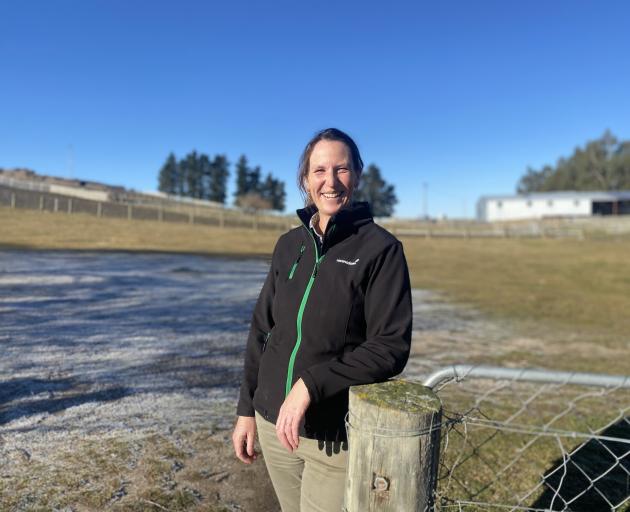 After 10 years at home raising her family and working on the farm, Julie Kearney decided to launch herself back into an off-farm career for the betterment of her own mental health and sense of purpose. PHOTO: ALICE SCOTT
After more than 10 years of being a stay-at-home mum and farmer’s wife, Julie Kearney decided it was time to get back into her career. Now, a year down the track, she is glad she made the leap. She shares her experience with Alice Scott.

Julie Kearney and her husband Tony farm Shingly Creek Station, a 10,000-stock-unit sheep and beef property, located at Morrisons in the Pig Root — Ranfurly is a 30-minute drive in one direction, and Palmerston in the other.

Mrs Kearney did a bachelor of agricultural science degree at Lincoln University and was an agronomist "in another life" before she finished up work to have their three children, now aged 11, 9 and 7.

With a passion for the industry and a strong work ethic, she said the 10 years she spent at home raising children and working on the farm were "amazing" and she continued to work on the farm for 18 months after her youngest started school.

"But I just wasn’t happy. I always managed to keep myself busy but the things I was doing weren’t fulfilling and I had lost my sense of purpose. I just wasn’t being as productive as I knew I could be.

"I was the dog’s body, picking up all the little jobs around the place that needed done. It got to a point that I either got myself a couple of dogs and stepped it up on the farm, or I went out and got back into my own career."

She chose to do the latter. An agri-manager role came up with Ravensdown Fertiliser and Mr Kearney said she was questioning them on the flexibility of the job in the interview almost as much as they were interviewing her for the role.

"I wasn’t really looking for a full-time job. I knew if I took on that kind of position it would need to have a lot of flexibility for family and the farm.

"Ravensdown has been amazing to work for, my boss is incredibly supportive and trusting."

Her office is based at home, and she does about 600km to 800km per week travelling to clients.

"I have never needed to go into head office. Thanks to Covid, everyone is very well versed with Zoom meetings and the expectation to be somewhere in person just isn’t there like it might have been beforehand."

Choosing to work off-farm had meant she had to let go of the "all the guilts".

"I have learnt to lower the standard for a lot of things. I was doing a lot for the kids but actually they are more than capable of making their own lunches and putting their washing away. They have had to step up and help out and as a result they have all really grown from it."

She got a house cleaner once a fortnight and had subscribed to Bargain Box every week for the evening meals, "which has been a game changer".

Having a supportive husband had also been key to her enjoyment of her career.

"Tony has been amazing; he is totally on board with being there for the kids if I can’t be."

The family have also simplified life a lot.

"This year the kids are doing just one winter sport so there isn’t that pressure to be on the road getting them to different locations, and they are fine with that, they are happy at home and mucking around on the farm."

She was quick to point out life was not rosy all the time.

"It can be tough, there’s no denying that.

"When things aren’t running well on the farm it can be hard and quite stressful. I am lucky this is a job that can, for the most part, be worked around what’s happening on the farm. I can get a lot of admin done if I get up early in the morning, so I can help Tony if he has a busy day planned."

She acknowledged working off-farm did not mean she got to relinquish any of her farm admin duties, and she set aside Sunday mornings to get through the farm’s paperwork. "That’s still there, it’s not going anywhere," she said, laughing.

Choosing to work off-farm had been a "big deal" that involved letting go of expectations and social pressures, she said.

"Some women are happy to be at home on the farm and that’s OK. But it just wasn’t for me, and that’s OK too."