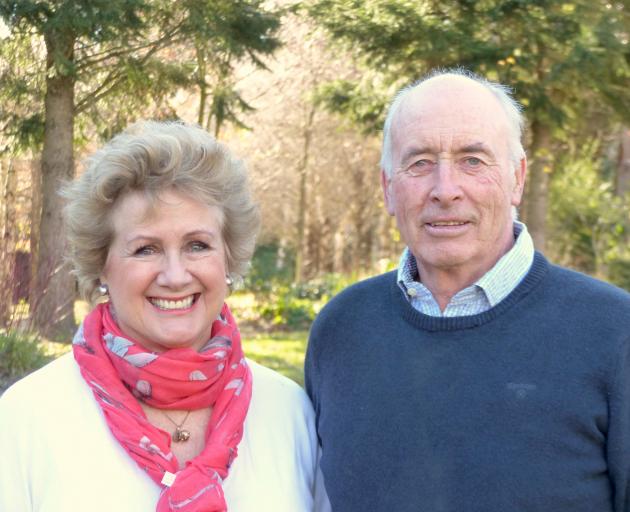 James Guild, pictured with his wife, Anna, has stepped down after nine years as QEII National Trust chairman. PHOTO: SUPPLIED BY JAMES GUILD
The QEII National Trust’s work with farmers is "living proof" that agricultural production and conservation can coexist on farm, James Guild says.

The Canterbury high country farmer stepped down as chairman of the trust earlier this year after serving the maximum term of nine years, or three terms of three years.

In that time, Mr Guild has seen the organisation grow to support more than 190,000ha of covenant land, about the size of Rakiura Stewart Island or Molesworth Station, near Hanmer Springs.

"We take on two new covenants a week, or about 120 a year. At one stage it was 300 a year and there’s still a lot of demand, but we’ve had a refocus towards quality," he said.

The change in focus was due to rising costs and a lack of resources.

"He bought it specifically to rehabilitate and remove wilding trees and wild goats. It’s an incredible philanthropic endeavour to the nation from someone who doesn’t even live here," Mr Guild said.

"It’s an example of what can be achieved. I have been aware of several people who want to do a similar thing, but it’s about how you fund it."

Around 60% of covenants were held by farmers, with the average size being about 30ha.

Some covenants were less than 1ha and may be a single tree, Mr Guild said.

"One of the problems we have is there is a perception that people give their land to the QEII Trust, which they don’t. It remains in the ownership of the existing landowner."

The covenant lasts in perpetuity, with the trust offering advice to landowners and, where possible, assistance with costs such as fencing and weed and pest control.

"It’s a mutually supportive role. We work alongside landowners and we realise there’s some big costs as pests and weeds don’t respect boundaries, and fences need to be replaced over time," Mr Guild said.

"The covenant is protected by legislation and you can only wind it up if the land or feature has disappeared — that means it’s been burned, flooded or disappeared into the sea."

The attraction for farmers in holding a covenant included preserving a unique feature for future generations, it could assist in developing a farm environment plan by demonstrating "green behaviour" and may improve the land value.

The trust employed 28 field representatives throughout the country, including three in Canterbury to assist landowners in creating and maintaining covenants.

Mr Guild’s family farm, High Peak Station, had about 5% of its 3600ha in four covenants, including a mix of wetland, river bank, bush and dryland tussock.

The property was purchased by his father in 1973, with the fourth generation now living on the property.

While he and his wife, Anna, were semi-retired, their three adult children and their partners were involved in aspects of the diverse operation which included sheep, beef and deer farming, honey, forestry and tourism ventures such as guided hunting and heli-skiing.