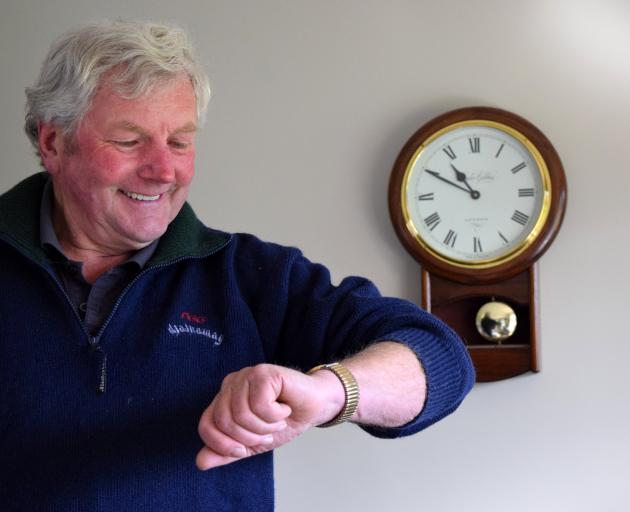 The trust had developed into something really good since launching in 2007, he said.

At the time, he fronted a Southern Rural Life lead story calling for trustees to join him as chairman of the new organisation, the Southland Adverse Events Support Trust.

After a three-year term in the top job, he became a trustee.

In the front-page photo, he posed under a National Bank umbrella, a prop used to symbolise how the trust would provide support to farmers when times were tough.

At the time, his long-time Westpac bank manager saw red for his client wielding the green umbrella on a front-page article, he said.

A proud Southlander, he was brought up on a sheep, beef, deer and grain farm at Dacre, near Invercargill.

On the block he owns, a sharemilker runs 540 cows.

After stepping away from the trust today, he would continue to fatten beef on his 350ha "semi-retirement block" in Greenvale.

Launching the trust in Southland was challenging, he recalled.

Similar organisations had already been formed in other parts of New Zealand, such as South Canterbury and Otago, but they had been launched as a result of an adverse event.

Setting up a trust to prepare for a possible event was difficult, he said.

This changed after a storm caused widespread flooding in the lower North Island in 2004 and showed more support was available to urban communities than their rural counterparts.

About 18 months after the trust was formed in Southland, the Government decided to spend $2.3 million to establish rural support trusts across New Zealand to foster resilience in the primary industries.

The Government now gave the trusts funding when an adverse event was declared, such as the medium-scale drought in Southland and the Clutha and Queenstown Lakes districts, unlocking $100,000 in government funding for six months until October this year.

When an adverse event was declared, that funding allowed the trust to guarantee a contractor would get paid for a service, such as using a digger to clear snow.

and remained the biggest challenge the trust had faced since launching, he said.

He recalled a farmer checking his stock and being pleased his ewes and their lambs had sought shelter by a stand of trees.

When he checked on them later, he noticed the flock was standing in the same position and found it was because their hooves had frozen them to their spots.

The storm allowed the trust to learn quickly on the job.

"That really got us up and running because we learned a hell of a lot."

The urban community rallied to help their rural counterparts, including Pak "n Save Invercargill providing goods at cost so food parcels could be distributed.

He recalled fondly the community working together to provide support, under guidance from the trust and the Civil Defence emergency management team.

A mix of rural professionals including stock agents, bankers and fertiliser reps volunteered to visit farms and report back what support was needed.

"Things were dire — some of those cockies were in real trouble."

The last major adverse event in Southland was when a state of emergency was declared in Gore, Mataura and Milford Sound due to flooding in February 2020.

Some farms were completely covered in floodwater, he said.

"That was a major — it came through and then they had to pick up the pieces afterwards."

The trust organised groups of volunteers to fix fences damaged by flooding.

An adverse event was not the only thing which could affect the mental health of a farmer.

Farmers today were "feeling under the pump from every direction" including a range of proposed new rules.

He was thankful commodity prices were up for most farmers.

"If we were getting poor income and had the stress of the legislation we are facing, the result would be disastrous — we’ve lost enough farmers all ready."

The suicide rate of farmers remained high during his time on the trust despite the subject being less taboo to talk about now.

Farmers were stoic and often told themselves they were OK when they were not and avoided seeking the help they needed.

If a farmer was struggling financially, the trust could act as a "conduit" to get them and their banker, accountant, lawyer in the same room to identify the extent of the issue.

"You can’t change the circumstances but you can get them through the situation."

People working in the rural sector, such as stock agents, alerted the trust if they believed a farmer was in need of support.

A signal someone was struggling could often be subtle, he said.

Often when a farmers claimed everything was OK, it could be a expression from his wife which might suggest otherwise, he said.

If a farmer was facing prosecution for something related to farming, the trust could offer support if needed.

"Our job is to support the individual through a process — we don’t condemn, nor do we try to defend them."

He had full confidence in the trust and the organisations supporting it, to continue the good work.

He acknowledged the "fantastic" work of Lindsay Wright and Janet Gregory to put "the meat on the bones" of the trust in the first years since the trust was launched.