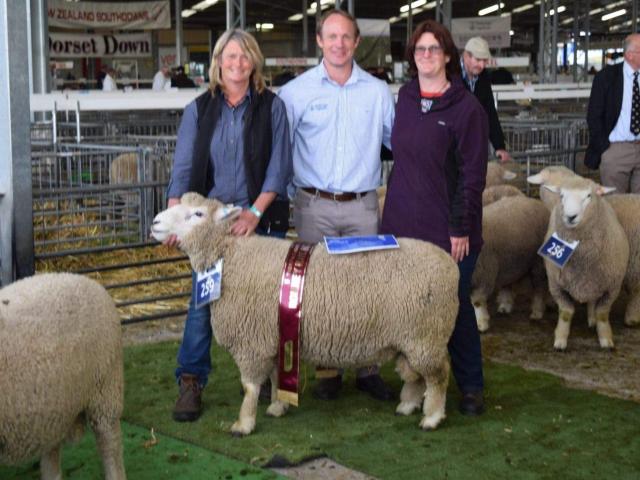 Ms Scott, who worked as a zookeeper for 15 years in New Zealand and Australia, and her partner Penni Loffhagen, a fourth-generation sheep breeder, have three sheep studs and also run beef cattle on a 260ha property at Hawarden, in North Canterbury.

Both have been around animals all their lives; Ms Loffhagen was born and bred at Culverden and moved to Hawarden aged 21. The couple now have 560 Suffolk, 90 Romney and 180 Gotland Pelt sheep.

"We had them[Gotland Pelt] as a bit of hobby and then, through some export work with the Suffolks, I ended up taking on some embryo from some quality sheep in Sweden," Ms Loffhagen said.

The Gotland Pelts now produced a good-quality wool and a good carcass, and the pelt was used for sheepskins, making them a commercially viable sheep. The wool was sold to spinners, weavers and felters, she said.

"With Covid, it has been a bit tricky. Hopefully, in time, we will be able to send the wool overseas.

"Our pelt order [to the United States] fell over because they didn’t know if they were going to be able to market it, but we found it’s quite popular in New Zealand."

Beef was added to the mix after a three-year North Canterbury drought as another income source on the dryland property.

After growing up in Takaka and Picton, Ms Scott moved to Christchurch in the 1990s, where she began working at Orana Park, and later ventured to Australia, where she worked at the Werribee Open Range Zoo, near Melbourne.

"It was so big; it was open range like a farm. The public caught a bus to see the animals and we drove round in Toyota Hiluxes to feed out."

Over the years, Ms Scott worked with giraffes, rhinos, antelopes, primates and big cats. Working with snakes "was an eye-opener".

Moving from working with little New Zealand geckos to big Australian lizards was another change.

In Australia, Ms Scott specialised in managing the food stores and designing exhibits.

"I came back for family reasons, but I found I was a little over-qualified for a zookeeper in New Zealand so I got into pest-control work," she said.

"I do miss having giraffes and rhinos in the front paddock, but I do love what we have in New Zealand with our native bird species.

"At the end of the day, it’s all animal husbandry. The main difference now is we don’t have to tranquillise the animals to treat them."

The couple were co-vice-presidents of the Hawarden A&P Association this year, but the annual show in March was cancelled five days before the event due to Covid-19.

"It means we will have to wait another year — 2022 will be our show as co-presidents," Ms Loffhagen said.

While they will not be sending sheep to A&P shows this spring, the couple are busy getting their ram hoggets ready for the ram fairs, with the Suffolk Breeders’ Club due to hold an expo in Ashburton on Thursday, November 12.

"We will miss the networking, catching up with people and seeing how people are going, but we will be back next year," Ms Loffhagen said.