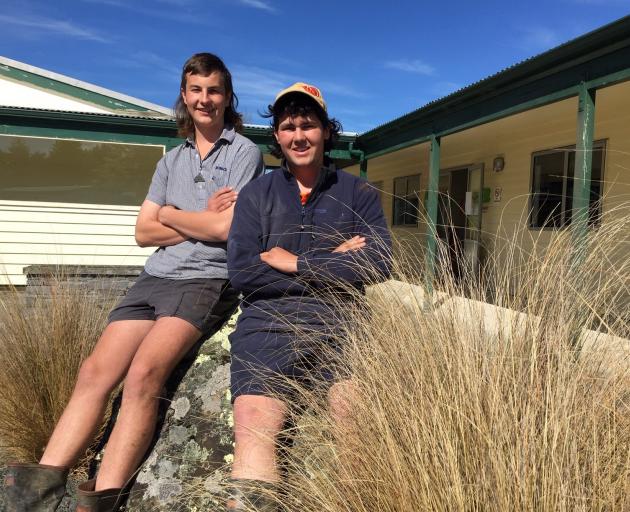 Telford campus mates Cody Craw, of Coromandel, and Harrison Major, of Whanganui. PHOTO: MARY-JO TOHILL
North Island agricultural students are making the most of their time in the deep South.

For a budding farmer, the South Island high country might seem like the ultimate place to launch a career. The sense of adventure, the high and wide, open spaces — they all appealed to agricultural diploma student Cody Craw, who has been doing a Massey diploma in agriculture at the SIT Telford Farm campus this year.

Originally from the Coromandel, he has just landed his first shepherding job at Mount St Bathans Station near Oturehua.

The 17-year-old is off a sheep and beef farm, but his new Central Otago workplace will be a far cry from the forest-beach environment of his home territory.

"It’s a bit of a contrast. I’ve always thought it would be great to work in the high country. It’s vastly different to what the North Island offers," he said.

He did a certificate level course last year, and enjoyed life in the South so much he stayed on to do a diploma this year.

His buddy, Harrison Major, who is completing a farming systems and equipment certificate, is in the process of choosing where life or study will take him next year. The 17-year-old from Whanganui has followed in his dairy farming father Kirk Major’s footsteps in opting to study at Telford.

“He encouraged me to come down. He thought it would be a good opportunity to get away. I could have been a mechanic, done a trade, but I decided to take the agricultural route.

“Dad’s got really fond memories of the place. He told me some stories, but he said the most important thing would be that I’d make friends that would last a lifetime."

He said he’d definitely made friends, and had also learnt about other aspects of farming, in particular his mate Cody’s area of interest, sheep and beef.

“I went out on the lamb beat and tailing. I decided to do sheep and beef, because I knew about dairying, but I may end up going back to dairying."

“I think I’ve got into much better work habits — work your dogs in the morning, study in the afternoon. I’ve got into a routine and that’s helped a lot. It’s real-life scenarios."

Harrison said his take-homes had been learning more about animal health — and the value of money.

“I’ve got it together much better with money."