People first is the goal 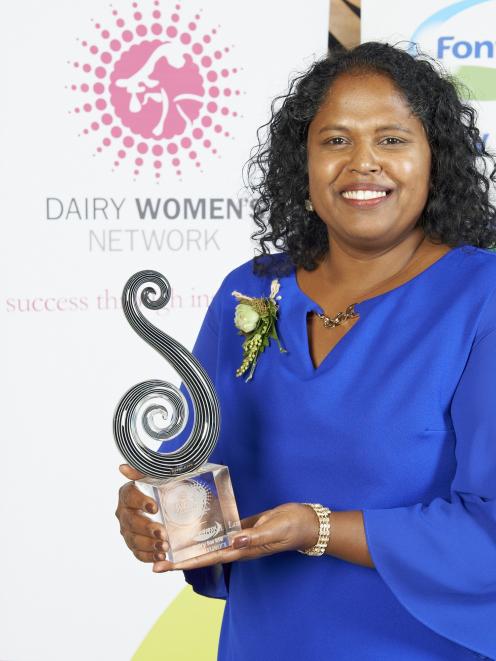 Enigmatic and engaging, the lawyer-turned-dairy farmer-turned-professional coach was recently named Fonterra Dairy Woman of the Year — and it is easy to understand why.

The Southland-based mother-of-three has a big vision; for the dairy industry in New Zealand to have a happy, productive, sustainable culture that puts people "at front and centre" of everything it does.

And, if that could be achieved, it would be "amazing on every level" — not just for the industry but also for families, farming businesses and communities — and it is that vision that excites her.

Ms Manikam has a fascinating back story. Brought up in South Africa, she completed a law degree before heading off on her OE.

Her intention was to return home and practice law in her father’s law firm and she thought her life plan was sorted.

But then came a "really lovely Kiwi boy" whom she met on her travels and that life plan got "completely turned upside down".

Donald Kidd convinced her that he was a "great catch" — she laughs — and she should move to New Zealand.

So she followed him to Northland 20 years ago where he was managing the farm that had been in his family for more than 100 years.

She knew nothing about farming, nor New Zealand, and while she acknowledged it was a massive undertaking, it did not feel like that at the time.

"I was in my early 20s, that stage in life where you kind of feel like you’re bullet-proof. It seemed so logical," she said.

Having already been travelling, it seemed like a natural extension of those travels and her own outlook on life and attitude included a desire to explore and see things.

The couple married and she did her law qualifications in New Zealand so she could practise here.

But their focus was on farming; it was going to be their primary business, and they also started a family.

Their farming business progressed to managing another farm in Northland and then the opportunity arose for a 50:50 sharemilking job in Southland.

It was a great opportunity but also a big decision to shift to the other end of the country where they knew no-one. But they knew if it did not work out, they could always return home.

That was 2004 and they still loved living in Southland 14 years later; for the opportunities in farming, the community, and the fact it was such a great place to live and raise a family, she said.

At Heddon Bush, where they lived, there were good farming people with a great work ethic and still some old-fashioned morals and values that she liked.

Now in her 40s, it was those kinds of things she was  drawn to and having a community with family values was "incredibly important".

The couple went 50:50 sharemilking for four years — in 2007 they were named Southland sharemilkers of the year — before a nearby farm was converted to dairying and they were asked if they wanted to join an equity partnership.

So they sold their cows and bought into the partnership, their  their first season being in 2008, and they were still there a decade later.

During her first decade of marriage, Ms Manikam’s primary focus was on raising the couple’s three children and helping drive the farming business.

But as the children started to get older, she — like a lot of other dairy farming women — started to "finally lift her head up" and question what she wanted to do now.

She realised that she had forgotten her identity a little, in the rush of motherhood and farming, and she got thinking about what made her "come alive".

Her very supportive husband kept reminding her that she enjoyed people and she thought about that a lot.

"What I love is being alongside people when they are growing and developing and you can be part of that journey, and it is so fulfilling and exciting to be alongside them," she said.

So Ms Manikam researched coaching and, taking a "massive leap of faith" and stepping outside her comfort zone, she did a coaching programme and never looked back.

She is the founding director of Iceberg Coaching and a strategic consultant for Farmstrong, working to support the wellbeing of farming communities.

She is also trustee of the Southern Dairy Development Trust, a coach and facilitator of the Agri-Women’s Development Trust’s Escalator programme, and a Federated Farmers Southland executive member.

Ms Manikam said she owed a "huge debt of gratitude" to Lindy Nelson, founder of the Agri-Women’s Development Trust for having the vision to set it up, and her ability "to see things in me I didn’t necessarily see in myself".

After completing the Escalator course in 2014, she was asked by Ms Nelson if she would come on board as a facilitator and programme director.

"That’s the beauty of the primary industry. When we have people tapping us on the shoulder, so much magic can happen," she said.

She was also literally tapped on the shoulder by Michelle Wilson to get involved with Dairy Women’s Network and that had done so much to add to her skills and confidence.

A key message for other women involved in the primary sector was they needed to back themselves and step outside their comfort zone as there were "massive opportunities" out there. It could be scary to do that, when you did not see what you had to offer, she said.

Receiving the Dairy Woman of the Year title was proof that the success of an "ordinary dairy farming woman" could translate far and wide.

"It shows you can raise a family and still progress through the industry, reach the top, and have a say at industry level," she said.

It was an honour and a privilege to be recognised for her work and she still found it "a little bit mind-boggling". She received a scholarship prize of up to $20,000 to undertake a professional/business development programme.

One reason she accepted the nomination was she saw an opportunity to create a platform to stand on and talk about creating positive culture change in the dairy industry.

She saw a "real need" in the industry to better understand the importance and benefits, both financial and non-financial, of prioritising and developing people.

The link between increasing happiness and increased productivity was understood by Fortune 500 companies around the world which spent millions of dollars each year to improve the wellbeing and happiness of their workforce.

Google’s philosophy was "to create the happiest, most productive workplace in the world".

If people’s happiness could be focused on, then that was a huge driver of both financial and non-financial benefits.

There was a huge positive ripple impact on themselves, their families, their farming businesses, communities, and the industry.