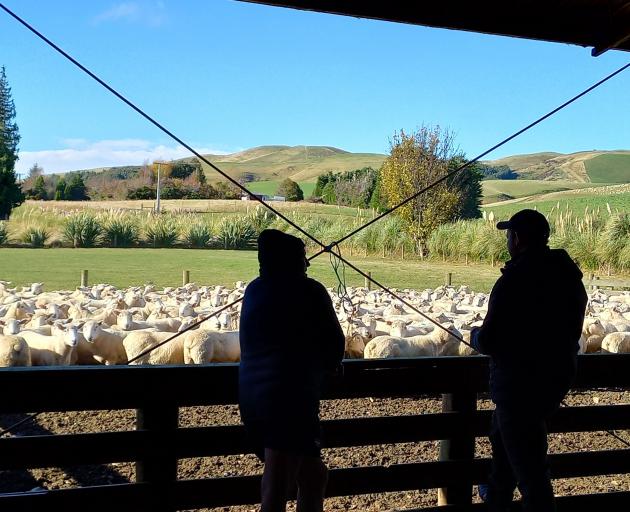 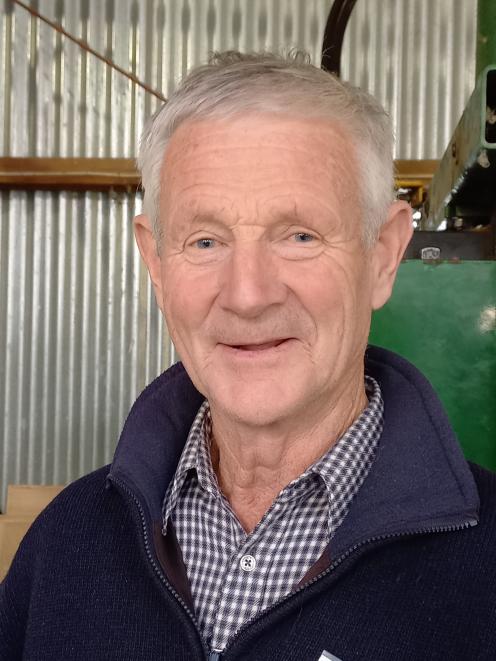 That lengthy involvement and contribution to the breed was recognised last week when he was awarded life membership at Perendale New Zealand’s annual conference which was based in Queenstown and hosted by the Otago ward.

Mr Ruddenklau, who founded the Newhaven Perendale stud in 1972, said he remained supportive not only of the breed but also the overall sheep industry. Long term, the future of sheep meat looked "superb".

One of the biggest threats was forestry, particularly carbon forestry, on better productive land.

He was not against trees, and plantings had been done on the Newhaven property, near Five Forks, but he was a believer in "right tree, right place."

There had been various highlights over the years, including selling high-priced rams and various industry awards.

One of the major things he got satisfaction from was the setting up and chairing of the Perendale New Zealand national progeny trial and the co-operation of so many breeders. 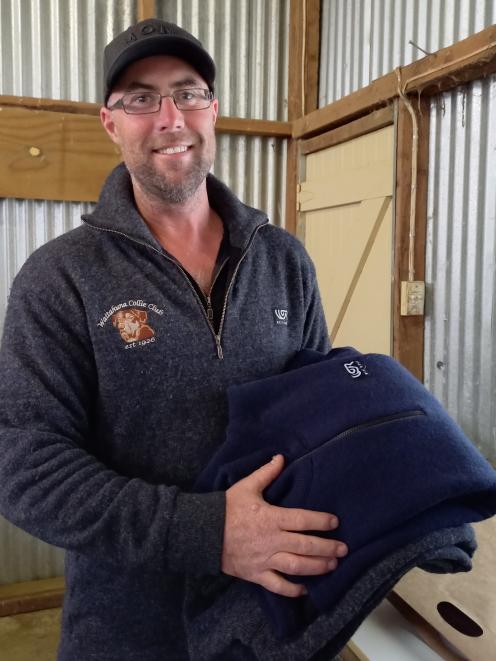 Murray Hellewell was busy selling his West Ridge jerseys which are made from Perendale lamb’s wool.
It had also been all about the people; he had made longtime friendships, not only with fellow registered Perendale breeders but also the many ram clients he had met over the years. There were now third-generation purchasers. He was also grateful for the long-standing support of his wife Robyn.

Since he first established his stud, the Perendale breed had been modified to suit present conditions. He was disappointed wool was still undervalued and frustrated that the "environmental green movement still seems to happily accept poly-fibres in the environment".

Wool had so many qualities, including being biodegradable and fire resistant and he was still hopeful the younger generation would be prepared to research where their clothes were from.

Mr Ruddenklau was thrilled to see Murray and Julie Hellewell’s West Ridge jersey business, producing jerseys from the Perendale lamb’s wool at their Lawrence farm, saying initiatives like that were "wonderful".

Mr Hellewell, who buys Perendale rams from the France family’s Hazeldale stud at Moa Flat, had his jerseys for sale during a visit to the stud on Thursday. He was pleased with the popularity of the jerseys, saying the next step was to get bigger.

Being an ex-shearer, Mr France said he still had a passion for wool and he had been supplying some wool to the Hellewells which had been rewarding, seeing it heading off to be used and respected, he said.

He and his wife Kerry bought the home block, a 568ha property in 2000, selling half the acreage in Methven and moving south.

Two and a-half years ago, a nearby 350ha property was purchased, which was probably one of the best things they had done. 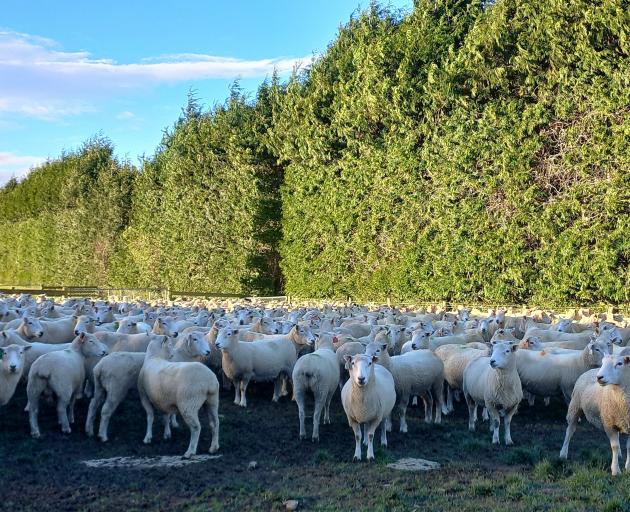 Sheep at the France family’s Hazeldale stud.
That property had a lot of potential that had never been extracted and it had been a "saviour" regarding the climatic conditions experienced in the past couple of years, Mr France said.

Two of their three sons were on the farm and it was a complex operation comprising about 10% deer, 15% cattle and 75% sheep having a lot of things happening at the same time. They also did their own agricultural work. 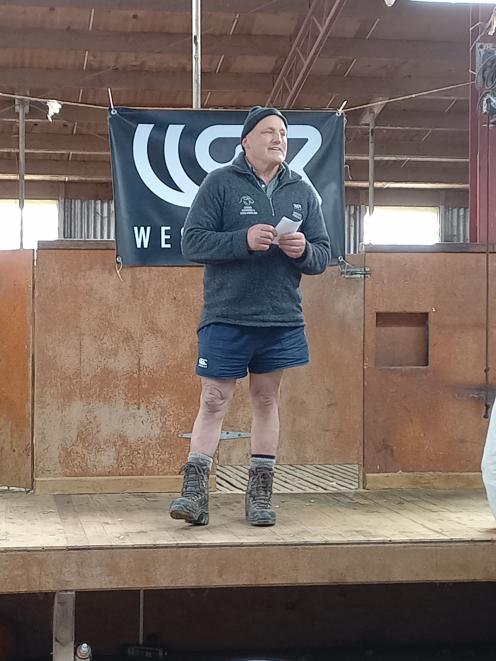 Moa Flat Perendale breeder Richard France outlines his family’s farming operation during a stop at their property.
Mr and Mrs France bought their original Perendale stud in 2002, comprising about 400 ewes and 600 hoggets.

While most people got new blood through purchasing rams, they had bought various ewes since then which had "worked pretty good"

When it came to sheep, he always went back to the "three B’s — bone, bum and barrel", whether a ram or a ewe, that was where they had focused their breeding over the years.

Very dry conditions had meant the France family had been feeding out big loads of silage every day since March 26.

Fodder beet had been a "game changer" for their deer — they have about 250 velvet stags and 120 hinds — making wintering "a breeze".

Mr France reckoned they had probably gained another half kilogram of velvet by having them on the beet during winter, also having improved condition scores.

They also killed cattle straight off the beet in August-September, although they had never put sheep on it. It might be an expensive crop to grow but, in the "big picture", they still got good bang for their buck, he said.

Conference-goers also visited Mike McElrea’s Gowan Braes Perendale stud at Edievale and were treated to a bus trip through the farm with spectacular views of the surrounding countryside.

This year marked Mr McElrea’s 30th mating of the stud and the day the breeders visited, marked the first anniversary since his father Dave’s death so it was particularly special to host the gathering on the property, he said.

The McElrea family was just the second family to own the property since it was settled in the 1880s when it was carved off the Moa Flat Estate. It was now just under 700ha and was 600m at its highest point.

His father bought the property in 1973 and Mike returned home from shepherding in the early 1990s. At that time, his father had just bought another block and they were looking for more ewes.

A stock agent took him to a property where the vendor said he would like to see his stud ewes carried on and so Mr McElrea said he almost got into the breed "accidentally". He had a lot of support from Otago breeders and it had been "quite a journey", he said.

Gowan Braes now ran about 3500 ewes, plus ewe and ram hoggets, along with 100 beef cows.

Son Sean had indicated he wanted to come home and they would probably start looking for another block to make enough work for them.

Two-thirds of the property was tussock country and the other third was cultivated. They struggled in dry autumns to fatten lambs and their farming operation had to be flexible — they had aimed for a ewe to produce good lambs at weaning and a lot of ram clients were attracted by that.

It was probably the toughest autumn Mr McElrea had experienced and the subsequent worm challenges were "frightening".

Greg Mirams, from Techion Group, said the climatic conditions had been the "perfect storm" for parasites.

A change of diet for animals from grass to crop, and with feeding out starting, would also lower stock’s immunity and could cause a blowout in worm burden.

He urged farmers to monitor egg counts before stock went on to a crop and after, depending on the drench regime.

Animals had to be monitored, so possible problems were picked up earlier, and management of paddocks might need to be changed. 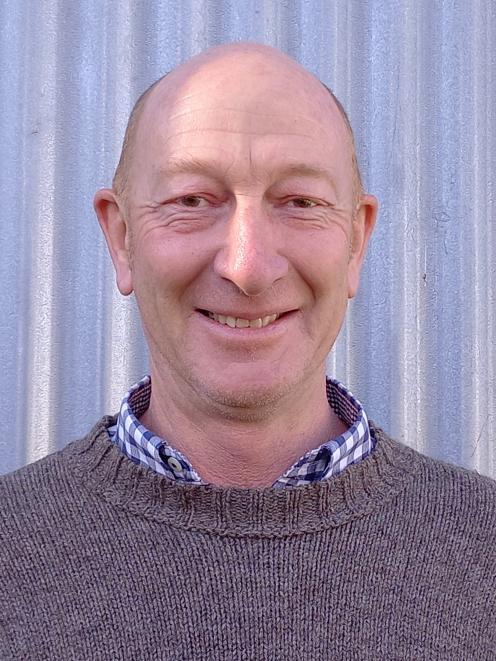 Also at the conference, the Otago ward conferred life membership on Howie Gardner who had been breeding Perendales for 40-ish years.

Mr Gardner and his wife Marion had a clearing sale on their farm, Awakiki Ridges, in the Puerua Valley, in South Otago earlier this year. They have leased the farm but continued to live in a house on the property.

Mr Gardner, who quipped "you know when you’re getting old when you’re offered life membership", said Perendale people were an extraordinary group and it had been great to be part of it.

After 40 odd years, he was very comfortable about the decision they had made, about the outcomes and where the sheep had gone. He wanted to enjoy his golf and get back into dog trials.

Otago ward chairman Fraser Darling said about 70 people were attending the conference from all over New Zealand.

It had been "a bit touch and go" for a while with Covid-19 threatening to disrupt it and he was "absolutely rapt" to be able to put it on.

Mr Darling had been involved with the breed for 22 years originally being given the opportunity to buy his cousin’s stud that his grandfather started in 1969.

He liked the hardiness and dual purpose aspect of the breed, along with the "unbelievable" people involved with it.

People from all walks of life attended the conference, including his lawyer partner Brenda who was enjoying learning about sheep, and the camaraderie was a common theme. Having face-to-face contact was important and it was also an opportunity to view breeders’ stock in the conditions in which they were brought up.