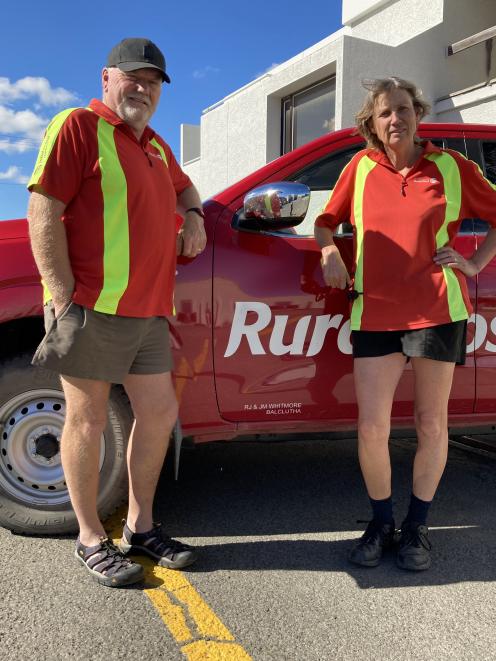 The South Otago couple recently bought the Balclutha RD1 run, which extends from Finegand to the north and the Nuggets-Tunnel Hill to the south, from David and Colleen Fenton,

"I feel the time is right, and I feel it is the right time to call time and move on to other things," Mrs Whitmore said.

It was exciting being in a new phase in life and to be able to wear shorts on the job, she said.

Like her husband, she had spent more than 30 years in the police force.

However, they were both wanting to spend more time together doing the things they loved that the demands of policing, shift and weekend work did not always allow. 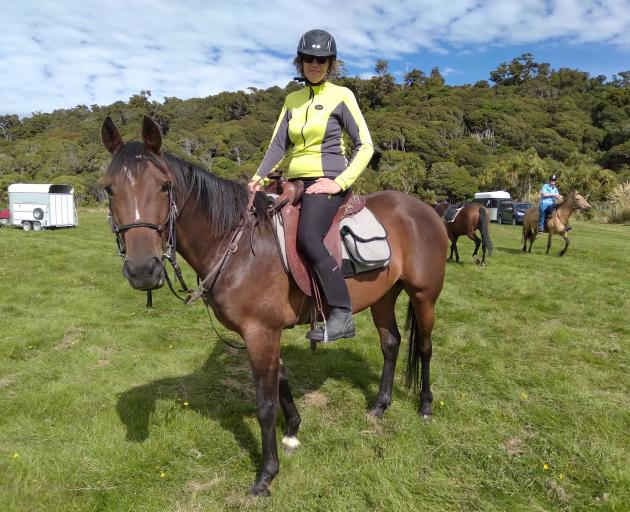 Long-time cavalcader and trail boss Jane Whitmore and her young horse Kenny near Kaka Point. Mrs Whitmore is taking a year’s leave from the police, which could be a permanent move.PHOTO: MARY-JO TOHILL
The move began when Mr Whitmore swapped his badge for a postie’s bag nearly four years ago.

"Quite a lot of police officers take a rural post run [after they leave the force] because it’s a good fit and because you’re already familiar with the area and you’ve got to know the people," he said.

His RD3 Balclutha route takes in Clinton in South Otago, where he served as the sole-charge senior constable for about four years, before making the decision to leave the force.

This followed a high-ranking career, which included stints as detective sergeant and senior sergeant.

"It was a bit of an adjustment, to be honest, as it would be for anyone suddenly changing direction."

But he had gradually got into the swing of things and was enjoying establishing himself in his postie run.

Mrs Whitmore was easing into the new role more gradually.

"I’ve really enjoyed my police career, but I want to get myself on the same page as Richard, and get off shift work and working weekends.

‘‘But it has been hard decision to make, so I’ve decided to take a year’s leave without pay to give myself the time to decide whether it’s the right option for me.

‘‘If I want to go back the option is there."

In the past four years, she’d been a relief driver for her husband so already knew the ropes.

"I know it’s the kind of job that’s great for the lifestyle that I’m trying to achieve."

Conversation at home was already making the switch from police to postie-talk as she was coming to grips with the new run.

The 56-year-old grew up at Arthurton near Gore. When she joined the police, she worked for two years in Timaru, followed by another two-year stint in Lower Hutt, where she met Richard (59), who was originally from the United Kingdom and joined the police in New Zealand.

She then did eight years at Gore, three at Balclutha, followed by a stint as part of the Regional Assistance Mission to Solomon Islands (RAMSI) programme to help restore law and order to the islands in the year of the Canterbury and Christchurch earthquakes.

Mrs Whitmore has worked on highway patrol as a sergeant and in youth services as a senior sergeant, as well as a frontline officer.

The Whitmores have two sons, Hayden and Liam.

Having been on leave since mid-January, reality hadn’t quite set in yet for Mrs Whitmore that this could be the end of her policing days.

"It doesn’t feel like I’ve left [the police] yet, and I’ve been flat-out around home.

"I want to do my horse thing, I like to play [contract] bridge.

‘‘I want to do these things while I’m fit and able, and able to make the change."

Mrs Whitmore had been a participant and trail boss for the Goldfields Cavalcade for some years, with Mr Whitmore also joining her on horseback.

"But we want to do more stuff together. We’ve got cool e-Bikes. We’ve done the Alps to Ocean. We want to see more of the countryside."

They’ve got a camper, with "Bridge the Gap" with the Balclutha road bridge emblazoned over the cab.

The motto sums up their quest to make a move from their full-on policing lifestyle to a more balanced life.

They bought a property of 13ha in Warepa about 13 years ago, where they run sheep and cattle and have been slowly developing it.

Mrs Whitmore has a passion for training young horses and was proud of the sand arena that they’d built in recent years.

"We’ve both had great careers. We both took different routes, but it’s definitely been fulfilling.

‘‘It’s nice to be leaving policing and to feel good about it.

"It’s definitely a career that I’d recommend for young people, especially women. You can definitely be on a level footing."