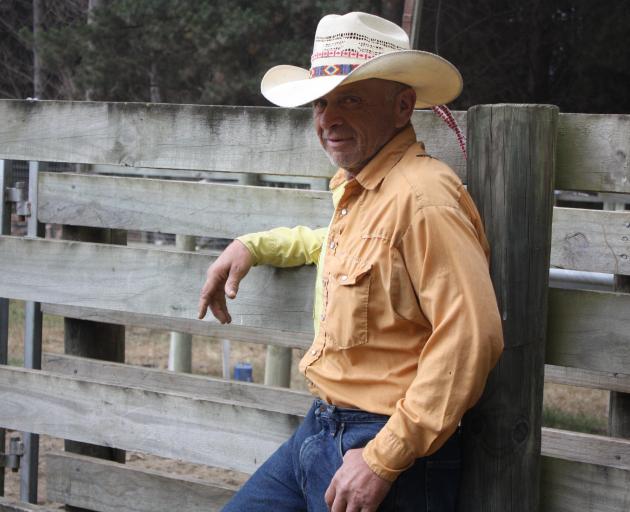 Len LeBlanc has travelled from Canada to compete in the South Island rodeo circuit. PHOTO: GUS PATTERSON
Two steel hips, a steel ankle and health complications have not slowed Len LeBlanc down.

While the 63-year-old Canadian rancher has taken a step back from his farm in British Columbia, he has stepped things up in rodeo — a sport he started competing in as a child. ‘‘I had surgery and they took out my bladder, prostate. I had a little complication so they took out my kidney,’’ Mr LeBlanc said.

‘‘I got two steel hips and a steel ankle. ‘‘[Rodeo] keeps me going. I’m not sitting on the couch trying to die.’’

At present, Mr LeBlanc is staying in Waianakarua with Henrietta and Graeme Purvis, who he met through rodeo circles, and is competing with Mr Purvis as a team roper in the South Island rodeo circuit.

It is his first time visiting the South Island, which he described as the ‘‘Garden of Eden’’.

Vernon, near the United States border, is now Mr LeBlanc’s home base, but he used to ranch about 400 cattle near William Lake, in British Columbia. Sheep were not a viable option because of the prevalence of mountain lions, wolves and bears, he said.

‘‘When winter hits there’s nothing, just snow.’’ At times, Mr LeBlanc would go six weeks without talking to anyone — apart from his horse — due to his remote location. Scorching summers and freezing winters were a challenge, but his love for animals kept him going.

‘‘People say we don’t care about our animals, but I’ve laid in the snowbank on Christmas Day trying to push a womb back into a cow to save her life,’’ he said.

‘‘I’ve given mouth-to-mouth to a calf that needs a little extra help — we love our animals.’’

Rodeos were a lot different in Canada, where professional riders could attend up to two rodeos a day in the summer, he said.

After competing at the Lawrence Rodeo, he noticed New Zealand’s stock used in rodeos were more wild.

But for someone who has been wrangling wild animals for almost half a century, it is a challenge he is up for. Next up is the Waimate Rodeo on Sunday.