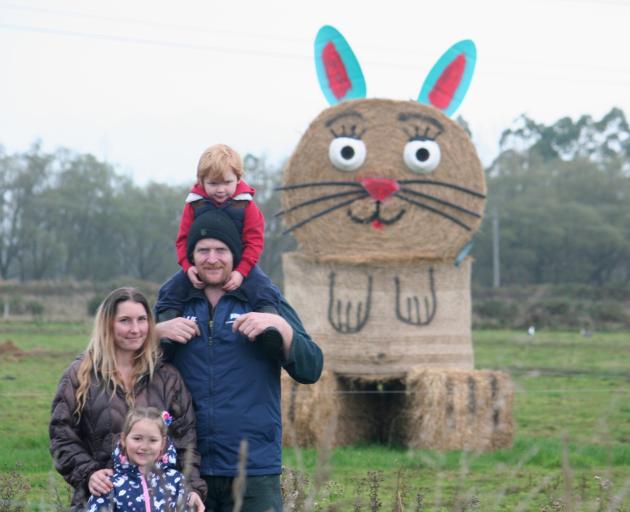 Hay bunny ...Park Lane Dairy farm manager Andrew Stephenson, wife Phillippa and children Maddy and Hunter with their giant female rabbit creation.PHOTOS TONI WILLIAMS
The Stephenson family, of Fords Rd in Willowby, spent a day of their lockdown creating a giant female rabbit to lure in the Easter Bunny and put a smile on the faces of people driving past.

The rabbit, made of hay bales, shaped plastic from empty 200-litre drums (ears), K-line pods (for eyes), alkathene pipe (for whiskers) and painted arms and features, including long eyelashes, spent a few days sitting in a paddock facing the road.

It got a lot of interest from passing motorists, including police, going about their essential travels during lockdown and successfully lured the Easter Bunny, who arrived the following day much to the delight of Maddy Wilson-Stephenson (7) and Hunter Stephenson (2).

But he did not make his Easter delivery easy — he left 12 clues around the farm which led to the discovery of a chocolate egg stash.

With the help of parents Andrew and Phillippa, the children followed the clues, which took three hours to crack and included travelling the length and width of the 230ha Park Lane Dairy farm where Mr Stephenson is farm manager.

The farm is a Fonterra supplier, milking 650 cows during the season and 150 cows winter-milking on a 54 Rotary platform, so there were a few cows to navigate around.

On the other side of the farm — in Longbeach Rd next to some nervous-looking Belgian Blue calves — sat a giant teddy bear, named CoBee, which also drew attention.

CoBee was a rural tribute to the nationwide urban windowsill movement and was made days before his neighbouring female bunny rabbit.

It was the ‘‘brainbear'’ of Henderson-Geddes siblings Caitlyn (14) and Abby (12), who are also good at organising scavenger hunts, and Maddy Wilson-Stephenson.

The trio live at different houses on Park Lane Dairy farm, which has been in the family of David and Jill Geddes for the past 50 years, but they researched and designed the bear together, inspired by other rural creations around the country.

It is made from large hay rounds (body and head), hay bales (arms) and tyres (ears), and has painted features.

Mr Stephenson, no stranger to making oversized novelty animals, which he did in England, did the tractor work putting it together.