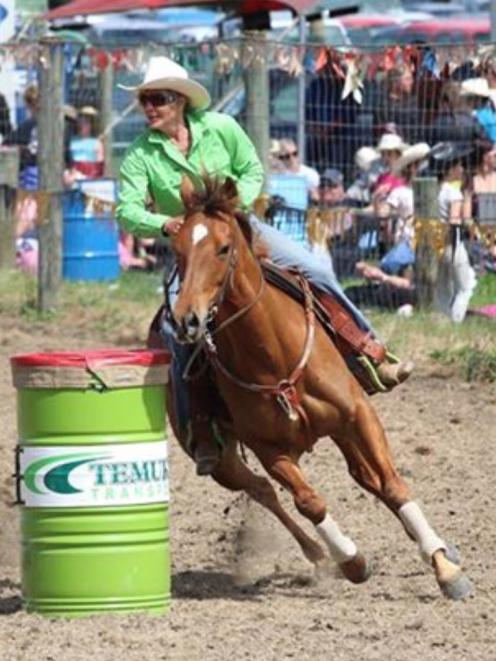 "I thought it was something else, until I heard my name and thought ‘what is going on here?"’

The award recognises the club or person who does the most for the promotion of rodeo in any given year.

She had intended to go to the annual meeting but had a cold, so stayed home.

"My friend Ginny Nelson accepted it for me and sent through a wee video.

She received the trophy for her work encouraging people to be more involved in barrel racing for the past seven years.

"At that time people never had anywhere to start a horse [in barrel racing].

"Not everyone was a beginner but there was nowhere to take green, fresh horses to try them out."

She approached the Wanaka Rodeo Club to see if she could start a barrel racing series, Central Barrel Racing.

"Since then we have done about nine series and given people the opportunity to get their horses up and running to the next level.

"They can gauge their horses and we encourage newbies coming through."

Barrel racing numbers have grown since then.

Points are awarded and at the end of the season and those with the most win sponsored buckles.

"We held jackpot events, and the kids would get a few treats.

Mrs McCall lives on a lifestyle block in Lindis Pass with husband Cameron, who she calls "my rock".

She was an open ranked barrel racer and a member of the first women’s team roping team in New Zealand.

She also spent time in Canada competing in the circuit there.

The next series starts on August 22.