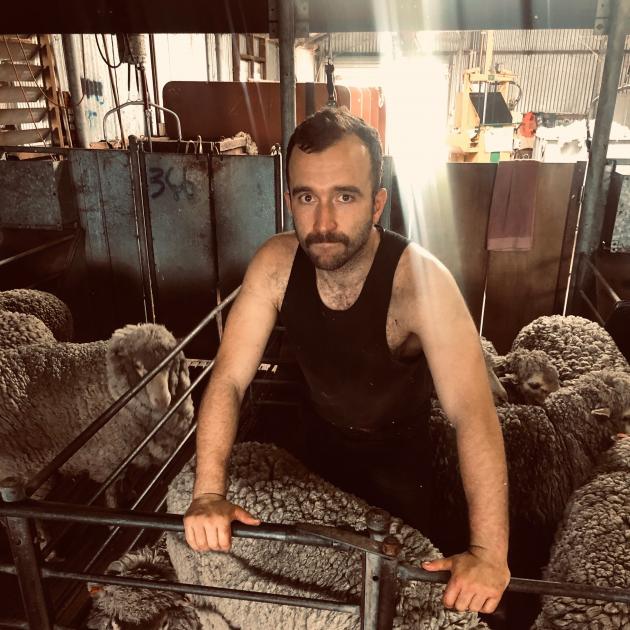 New Zealand entrepreneur Jovian Cummins takes a break from shearing in Western Australia this week. PHOTO: SUPPLIED
Could Woolies Jeans be the next Allbirds? Jovian Cummins certainly hopes so.

The young New Zealand entrepreneur, at present shearing in Western Australia, is launching an equity crowdfunding campaign on the platform PledgeMe on Monday.

He hopes to raise up to $500,000 to help him patent the designs for the merino-lined jeans for workwear and help build a supply chain.

The genesis for the business came in a woolshed in 2018 when the then 22-year-old decided he was "fed up" with the hot and sweaty jeans he was wearing, he said.

He enlisted his mother to help and the pair took apart a pair of of his jeans to get the outline and resewed a merino lining in.

Since then, he had been making the jeans for mates "in exchange for some beers" and he now wanted to hire some "smart hardworking Kiwis to help really get this thing going and start shipping worldwide".

"I’ve never known much about business but know that these are some of the best jeans I have seen across shearing in England, Ireland, Scotland, Australia and New Zealand," Mr Cummins said.

"I believe I have been able to create the world’s most comfortable jeans for workwear such as farming and shearing. This is because temperature changes so rapidly in these jobs and merino keeps you warm when it’s cold and cool when it’s hot.

"Because of Covid, I am more motivated than ever to push this company to the world stage because I know so many people who have had their jobs affected and I don’t understand why New Zealand can’t have its own jeanswear company, when the materials are produced right here, the jobs should also be produced here."

Wool was the "original performance fabric" which controlled odour, regulated temperature, repelled water, wicked away moisture and resisted stains and dirt, while also being a sustainable resource.

Mr Cummins had already received good feedback for the product, saying he had identified "a huge hole in the market", and people also liked the concept of the jeans being New Zealand-made.

He might not have much business experience but he had good people skills and a lot of farming contacts.

"I think I’ve got a good eye for what works," he said.

"I’ve seen the success Allbirds has had and I know that was started by a crowdfunding campaign, so that is why I’ve decided to go the route of crowdfunding with PledgeMe."

Allbirds — which raised more than $100,000 crowdfunding — is set to follow Rocket Lab and become the second company founded by a New Zealander to line up a multibillion-dollar Nasdaq listing this year.

The maker of environmentally friendly footwear and activewear, made from New Zealand merino wool and various recycled materials, was founded in 2006 by ex-All Whites captain Tim Brown and renewables engineer Joey Zwillinger.

Given the border restrictions, Mr Cummins was unsure when he would return to New Zealand but, outside shearing, he was able to do a lot from his laptop. He had ideas for other clothing options in the future.