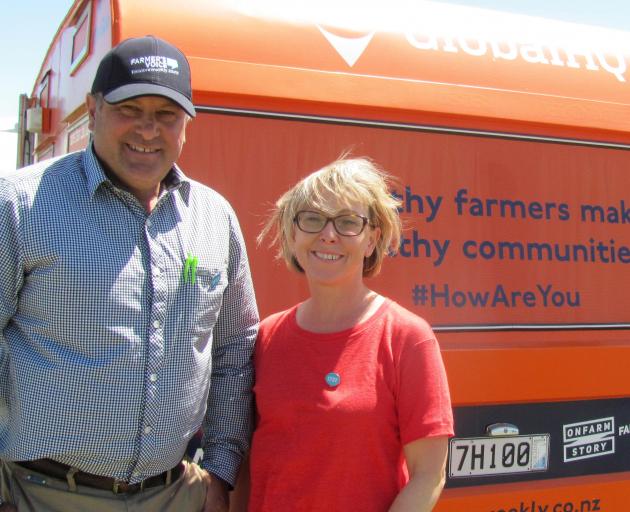 Rural advocate Craig Wiggins and Dr Sue Fowlie, of Rakaia Medical Centre, taking healthcare to the rural community with the Farmer First initiative. PHOTO: TONI WILLIAMS
Craig Wiggins puts his head above the barricade, but only for a cause.

He likes to help farmers, and facilitate help.

He is a public figure working as an MC, columnist, videographer, sports commentator and horse trainer, as well as a farmer.

And in his spare time — of which there seems no limit despite there only being 24 hours in a day — he is a rural health advocate and farmer wellbeing champion.

He uses his ability to connect with others to good use.

"My driving force behind everything I do, is community-based. I’m lucky I am able to help in any way, shape or form."

There is a Farmer First rural health caravan — set up with Rakaia GP Dr Sue Fowlie — which put a "rock in the water and created some pretty big splashes", Craig said.

It highlighted a gap in rural health and was a way to get a GP to farm events and normalise regular health checks for farmers.

The caravan, which started as a horse float, is parked up at rural events nationwide to encourage farmers to pop in for a check.

It was purchased, refitted and backed with support of Feilding couple Dean and Cushla Williamson, and is expected in the long-term to be placed under ownership of the Saleyards Silhouette Charitable Trust.

"We know that many farmers often put other priorities ahead of regular health checks ... many farmers have limited access to health services and many face social isolation."

The service is a practical, grassroots-driven way to engage farmers where they feel comfortable and can leave their gumboots on, he said.

There is also the annual Farming Family Day at the Races events, his work as facilitator, workplace engagements and an online rural forum every Thursday night, called Whatever with Wiggi.

The online Zoom sessions started during the nationwide Covid-19 lockdown as a way to connect with other farmers during lockdown.

It was a chance to talk the breeze about any topic.

In early March Craig (52) had a whiteboard and diary full of engagements through until late-July.

His last event was the New Zealand Rural Games in mid-March. Nine days later the country was in lockdown. 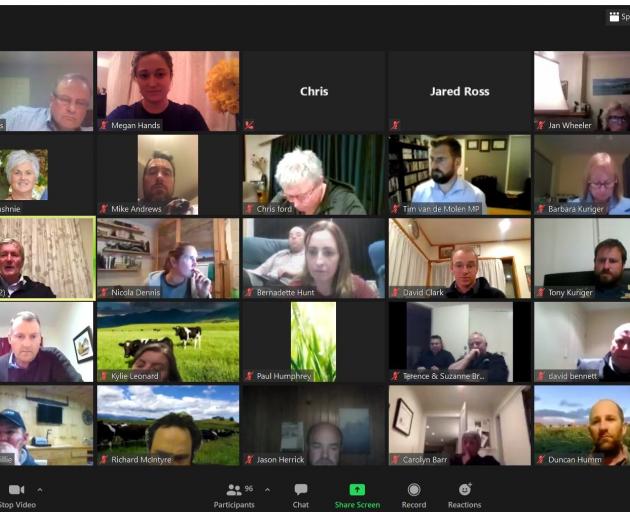 The first Zoom session 15 people turned up. It is not advertised except by word of mouth.

"It has morphed into a real support network, and a current affairs network," he said.

There have been guest speakers; the first was Sir David Fagan, but there has been Hamish Marr, politicians including David Bennett and Barbara Kuriger, and Damien O’Connor has fronted twice; the last time was to speak about freshwater policy. Ninety-eight people logged in.

The sessions have covered a range of topics including migrant workers, road user taxes, sharemilking issues, and glyphosate use and it is all covered under Chatham House Rules to allow free discussion.

There have also been open mic nights.

Some of the discussion topics have made it into mainstream media and to Parliament.

"Whatever with Wiggi is just a facilitator to let people have voice," Craig said.

Post lockdown the group is still going strong, and has grown to more than 710 group members.

Not everyone is on at the same time, but there is talk about adding a second weekly session.

Members are stretched from Kerikeri to Invercargill and from a range of industries. There are beef, deer, sheep and arable farmers, Federated Farmers representatives at national and local levels, Ministry for Primary Industries staff, media, corporate farm managers/administrators and policy makers.

Craig said his activities would not be possible without the support of wife, Annabelle, and he is very appreciative of her backing.

Craig grew up on a sheep and beef farm in Raetihi, near Mt Ruapehu in the North Island.

His grandparents were farmers, and his parents Neil and Jeni bought a neighbouring property before taking over the family farm.

Neil died young, aged 53, and Craig eventually bought some of his mother’s share in the 300ha property.

He met Annabelle on the rodeo circuit — she was a competitive barrel racer and he was a commentator — and while they lived together in the North Island for a while, they eventually made the decision to move south.

It was Annabelle’s home district; her parents were at the Rakaia Gorge.

They both liked Methven and bought a 30ha property on Methven Dromore Road, north of Ashburton, in 2007.

On the farm they have quite a few horses used for clerking or barrel racing. Their daughters, Genevieve (8) and Millie (5), also have ponies.

They farm yearling cattle and grow pak choy for seed.

“It works. I still feel like I’m a little bit of a farmer,” he said.

Craig’s work, whether commentating rodeo, jet sprinting or agricultural events, has included work nationwide as well as overseas in Canada and Australia so there was a lot of travel — up to 85 flights a year — so a Mid Canterbury base was ideal.

Not only is it a great place for their family, but Annabelle’s parents live at Staveley, along the foothills, and Craig’s mother, Jeni, has moved to Ashburton.

"We like it down here, it’s nice and central, and it’s close to the airport," he said.

In the early days there were guided tours to Alberta, Canada, and there was a plan to host another tour this year, which would have included attending the Calgary Stampede.

But the global Covid-19 pandemic put paid to the tour as they were calling for names and deposits, Craig said.

Four years ago, Craig was approached by horse trainers Ricky and Judy May to clerk the course at Methven races. The work has grown to doing 40-plus days of clerking with extra race meets at Addington, Ashburton and Rangiora.

And he loves it.

"It’s really good fun. Being on a horse is my stress relief,” he said.

Another is whipping up dishes in the kitchen, and he is keen to share a snap of his venison pies; a couple are destined for the oven and the freezer but there is at least family-sized pie lined up to give away.

And it includes cooking anything he catches or hunts, although lately he admits the hunting has gone on the back burner.

"Hunting has gone by the way in the past few years; I have been too busy," he said.