From tour bus to tractor-driving 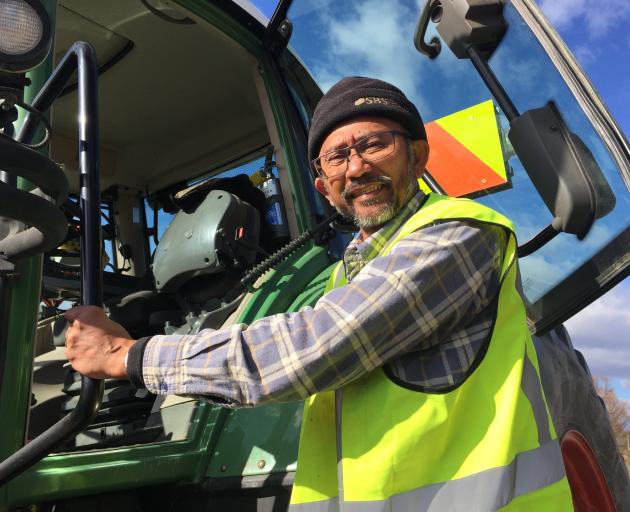 Reynold Alvins has changed careers from a tour bus driver in Queenstown to a tractor driver in Central Otago. PHOTO: MARY-JO TOHILL
Central Otago seems a strange place for a marine master in command to end up.

And working on a farm, stranger still.

However, Malaysian-born and raised Reynold Alvins is loving it.

He is one of thousands who have lost their jobs in the tourism industry, the sector he had been working in since he retired from his sea-faring career, in 2017.

In an unexpected career-change brought on by Covid-19, the former driver-guide who worked for Scenic NZ in Queenstown, has swapped his bus for a tractor and is working in the agricultural industry near Alexandra.

Before his bus driving job, he had spent 39 years in the marine industry, sailing on commercial ships, including 24 years as master.

When he came ashore three years ago, he was not sure what to do with himself. His Kiwi wife, Gayle, was used to him being away for three months at a time at sea.

"After three months at home, she said I had to look for work. She said ‘I don’t care what you do, but you need to do something’."

He did a few jobs, including grading cherries and working as a postie.

"I was very hesitant as I did not think I would be able to handle big coaches on the road let alone around the towns and cities. But my son said to me, Dad, if you can drive and dock a 400m ship, you won’t have a problem with a 12m coach.”

In fact, parallel-parking a bus in a tight spot was probably harder than berthing a ship, he said.

He heard about an Agricultural Contractors Expo held in Queenstown in June, and with his wife’s encouragement, registered to attend.

At first he was hesitant about committing to a six-week-long course through the Southern Institute of Technology, but figured it would give him a whole new skill set.

It hadn’t been easy.

"I thought, how difficult can it be to drive a tractor or any farm equipment. You get behind the wheel, start it up and go. Turns out its not that simple. First of all there is Health and Safety. All the equipment, tractors, implements, are state of the art equipment and a lot of them are computer controlled, so during the course, safe operation of these machinery and equipment was constantly drummed into us. We were taught how to handle these machines in a very safe way and to treat these machines with respect as they are most unforgiving.”

He has just finished a placement with agricultural contractors Reid and Pauleen Gare of Central Rural Services near Alexandra, and has been offered seasonal work.

"Even as a ship’s master, I always said you were never too old to learn new tricks. Sometimes it’s daunting. It can be a bit of a challenge, but I love a challenge, so my advice to others is just go for it.”