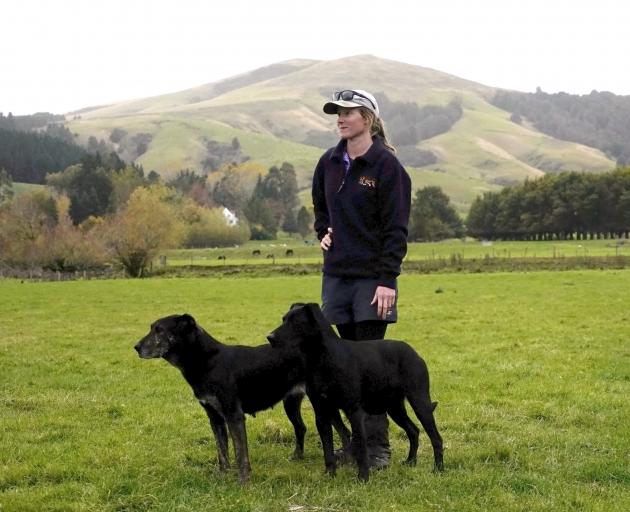 Glenaray Station shepherd Kirsty O’Connor prepares for the South Island sheep dog trial championships being held in Central Otago this week. PHOTO: KIM CLARK/BLACK AND TAN
If every dog has its day, then Kirsty O’Connor will be hoping that day dawns for Dusk — and Pitch — this week.

Ms O’Connor (28) is a first-time competitor at the South Island sheep dog trial championships being held at Earnscleugh Station, near Alexandra.

More than 200 triallists and about 500 dogs will be competing across the four events for five days from today.

The championships were organised by the North Otago dog trial centre and the Omakau-Earnscleugh Collie Club.

A shepherd at Glenaray Station, at Waikaia, for the past two years, this was about Ms O’Connor’s fourth year trialling. She always thought trials looked "pretty cool" and a friend and her decided to give it a go.

She grew up at Knapdale and, despite always having a hankering to be in the hills with a team of working dogs, Ms O’Connor could not get a job as a shepherd when she left school.

She worked on a dairy farm for four years before getting a job as a shepherd about six years ago. During that time, she did a stint in Australia working on a cattle station.

Dogs had been a passion "forever" and she knew from about the age of 10 what she wanted to do for a career. She now had a team of 10 dogs, which ranged from pups to an "old boy".

Glenaray, one of Southland’s best known stations, was a great property to work on. "It’s pretty cool. I really like it. Every day’s a dog day here."

She also had the opportunity to break-in a horse while she had been there, which she had enjoyed; horses were still used regularly on the property.

She has two huntaways qualified for the championships; 5-year-old Dusk and 3-year-old Pitch. Both she got as pups, with good bloodlines, and trained them herself.

Both bitches also qualified for the New Zealand championships being hosted by the King Country centre at the Taumarunui Collie Club from May 30.

Ms O’Connor had next week off work and was looking forward to a "pretty big week" — "a lot of socialising and keeping your dogs right".

She described Dusk as quite smart — "she taught me a lot when I was breaking her in" — while Pitch was a lot harder to hold but she was still clever.

Ms O’Connor admitted to a few nerves before a run, even though she tried not to be nervous, but a lot of the older, more experienced competitors also got nervous — "but they wouldn’t tell you they do".

Successful triallist Matt Clark also worked at Glenaray and she was "pretty lucky" to have him as a next-door neighbour to bounce ideas off.

He had been the biggest influence on her with her huntaways, while prominent triallist Brian Dickison, who had moved to Waikaia, had helped with her heading dogs.

Qualifying for the South Island championships was "awesome"; she joked that she used to tell herself that she could retire when she won an open trial. "I won an open and it was like, I think I want to win another one now," she said.

Dog trialling required hard work and a "don’t give up" attitude. "You have a lot more bad days than good days. When you have a good day, it’s pretty good".

Her biggest thrill was winning an open, at the Maitland trials, with Dusk who also won the huntaway section of the first Black & Tan Young Guns competition, an initiative launched last year aimed at getting more young people competing in dog trials.

Dogs were a crucial part of her everyday work and getting a good farm dog, before a trial dog, was always the priority.

"I do try and keep them good at work as well," she said, adding that resulted in a lot less yelling and headaches.

There were times when her good dogs were either sore or tired, and she was running young dogs, that she did feel like a junior shepherd.

But she had a "really tidy" heading dog in her team, and a nice young huntaway who was "pretty classy" that she hoped would come through the ranks — "unless I wreck them".

Dog trialling was special in that it was a sport that had no age limit on it, although it was hard to compete against people with a lifetime of experience.

About 4000 of the Campbell family’s merino sheep, at Earnscleugh Station, would be used during the championship, on all four courses.

She expected Dusk would "go all right" with merinos — "she’s a bit softer" — while Pitch tended to hunt a bit harder, but the pair would "give it a go".

One of her good friends, Amy Robertson, from Kaka Point, also broke open this season and she would be campaigning two heading dogs at the championships.

"It’s cool I’ve got two huntaways, she’s got two heading dogs, we don’t have to compete against each other yet . . . until she gets a huntaway going and I get a heading dog qualified."

In the future, Ms O’Connor would love to own her own property — "but that’s pretty far down the track yet", she said.