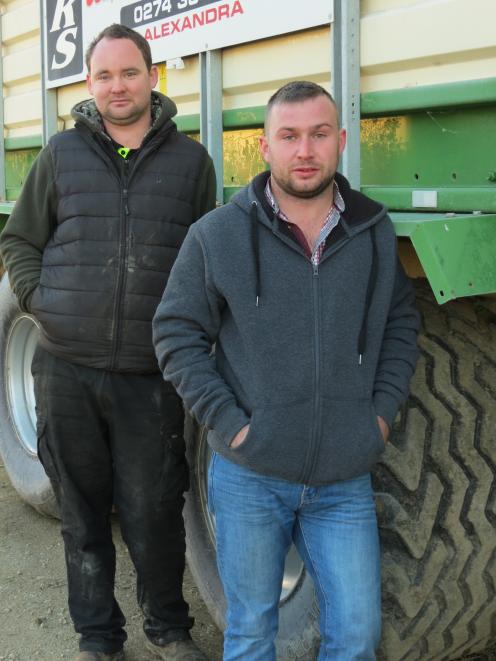 Caolan Duffy (left) and Michael Grimes.
Michael Grimes and Caolan Duffy only planned to be in New Zealand for six months, working for an Alexandra contractor, but they are unable to return home to Ireland.

Mr Grimes has a 48ha mixed farm in Ballinrobe, County Mayo, and was looking forward to returning for lambing and calving, although his parents were keeping an eye on it, while Mr Duffy has a baleage, silage and slurry business.

Mr Grimes has been working for Reid Gare, of Central Rural Services, Alexandra, since October 15 last year under an essential skills visa. He was supposed to fly out on April 20, just after the Covid-19 border restrictions were imposed.

"It was not possible to leave, but Immigration New Zealand sent us emails saying our visas had been extended."

His visa runs out on September 23, and while that was a couple of months away, he was still concerned about remaining in the country without the paperwork.

Mr Duffy, who lives near Donegal, arrived on the same day to work for Mr Gare, and was due to fly out two days before Mr Grimes to join his parents on his 40ha farm.

"My mother is a nurse and said it was pretty bad where they were with the virus, and it would be safer here."

His visa was for a year and runs out in October.

Both have continued to work for Mr Gare, maintaining the vehicles and equipment or working on a digger and they receive the Government’s subsidy.

Both have yet to make a decision about whether they return home to visit family or stay with Mr Gare for the following season, and that was dependent on what INZ decides.

Mr Grimes said Mr Gare was wondering if they could stay to train people to operate the balers.

"We had couple of locals apply for jobs, but he needs someone with experience.

"It has all changed from years ago when we were growing up and everyone wanted to drive tractors, but now none of the young ones want to do it."