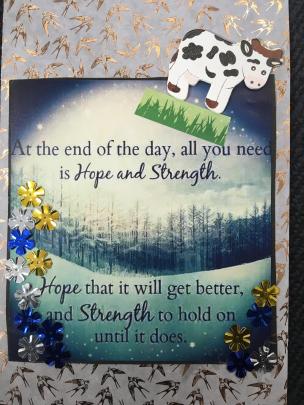 One of the cards made by pupils at a Ranfurly school for farmers affected by Mycoplasma bovis. PHOTO: SALLY RAE 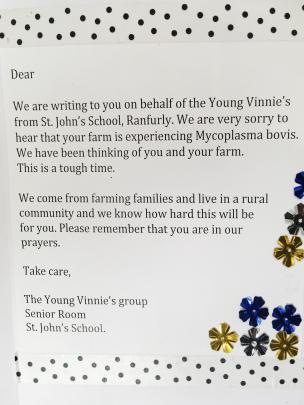 Otago Rural Support Trust chairman Gavan Herlihy was ``blown away'' to receive handmade cards from school pupils to be distributed to farmers affected by Mycoplasma bovis.

Members of the Young Vinnies at St John's School in Ranfurly were to be congratulated for the caring gesture, Mr Herlihy said.

It was a very stressful time for those affected and he expected receipt of the cards - which he was distributing on the pupils' behalf - would be both treasured and appreciated.

``This is a time when rural people must look after and support fellow rural people. The actions of the St John's Young Vinnies is a shining example of that spirit,'' he said.

In a letter to Mr Herlihy, the members of the St John's School senior class said they were part of the Young Vinnies Society, which helped people in need.

Their focus this year was to help and comfort their community through a variety of projects and they decided they wanted to do something for those affected by the disease.

There are at present 41 active infected properties throughout the country. The Ministry for Primary Industries is preparing for a second round of nationwide milk testing, checking every dairy farm for the presence of the bacterial disease.