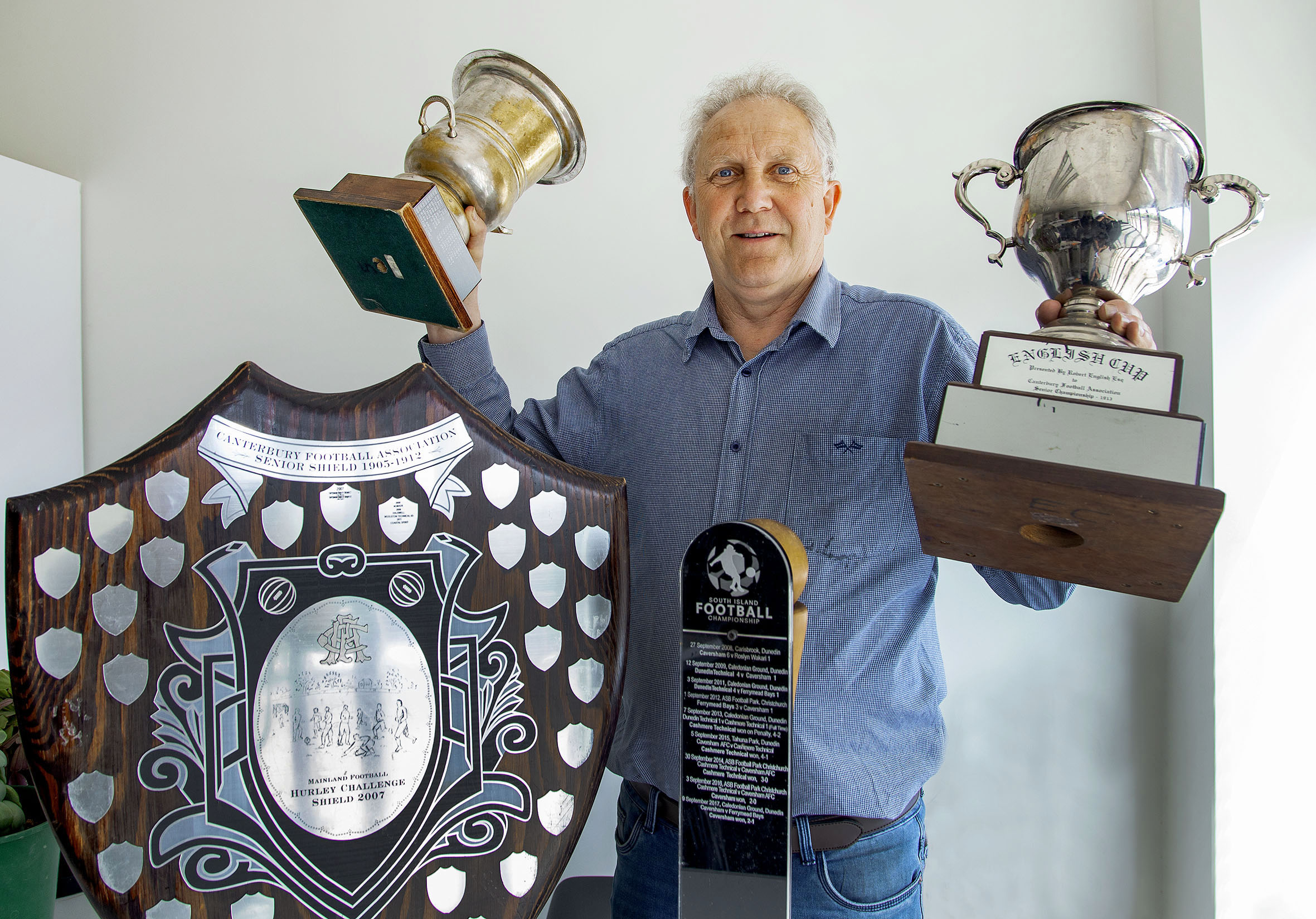 Cashmere Technical manager Paul Nicholls with the spoils of the premier men’s team’s ultra-successful football season. Photo: Geoff Sloan
Paul Nicholls has ample wins to savour when he reflects on another dominant season by Cashmere Technical, though it was two games the side didn’t win that really impressed the football team’s manager.

Cashmere Technical put the exclamation mark on an unbeaten three-tournament campaign when they completed another Mainland Premier League-English Cup double by beating Christchurch United 2-0 in the final last Saturday.

That victory means the club formed in 2012 has ownership of four trophies.

Only the Chatham Cup is missing from their silverware cabinet at Garrick Park, and possibly only because Covid-19 ensured the competition could not be held this year.

Cashmere Technical’s defence of the league crown was so emphatic, they won the 21-round competition by 21 points, amassed 82 goals and conceded a mere 13 while racking up 19 wins.

"It’s obviously been a very successful season,” said Nicholls, who switched focus to 3-3 and 2-2 stalemates with Ferrymead Bays and Nomads respectively.

"We were on the verge of losing them, but we kept going and ended up getting something out of those games.

"As far as the league was concerned it didn’t really matter but for the boys to keep that loss column zero was a fantastic effort.

"We conceded three in the first 25 minutes at Garrick Park on wet, windy, horrible day.

"We managed to get one back before halftime, we kept plugging away and we managed to score twice in the final seven minutes."

Garbhan Coughlan netted the point-salvaging double while Danny Boys equalised in added time in the final match of the regular season to thwart Nomads.

The goal glut was spread around with Lyle Matthysen the league’s top scorer with 19, Coughlan produced 12 while Japanese newcomer Yuka Taguchi and Andy Tuckey got 10 apiece.

Cashmere Technical have not lost in the league since the opening round last season, when they lost 2-1 to Ferrymead Bays.

Nicholls attributed the 34-game unbeaten streak to a cohesive team blessed with the experience of 200-game veterans Dan and Tom Schwarz and Danny Knights.

Coach Dean Hutchinson has also been at the helm since 2016 after succeeding John Brown.

“The turnover isn’t high, that is a big part of it," Nicholls said.

"We’ve also got a very successful reserve side as well, that ensures the first team don’t get complacent."

Cashmere Technical were also unbeaten in 2018 when the league was played over two rounds - but they were knocked out of the Chatham Cup at the semi-final stage so this campaign was one for the history books.

And now the challenge is to maintain those high standards in 2021.

“It’s a question we always ask ourselves,” Nicholls said.

“We’ll give it a couple of weeks rest and then we’ll sit down, start talking about that and see where we go.”