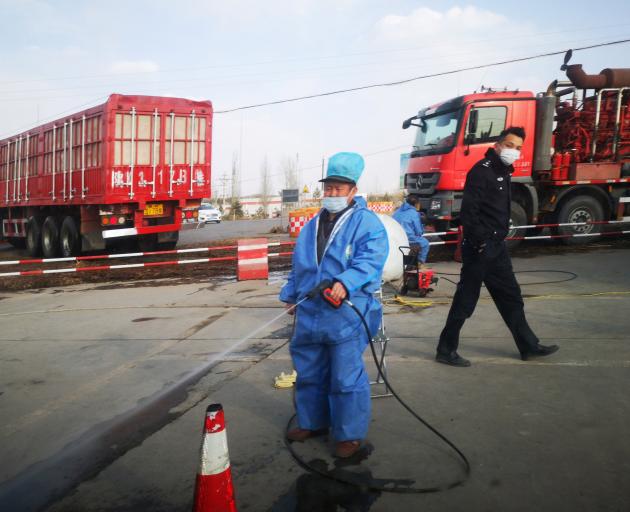 A worker disinfects a vehicle last month as a police officer walks by, near a farm where African swine fever was detected, in Yulin, Shaanxi province, China. PHOTO: REUTERS
China's devastating outbreak of African swine fever will have a spillover effect on the dairy sector, a new report by Rabobank says.

China is the world's largest pork producer and accounts for about 50% of pork production globally.

The African swine fever epidemic was expected to reduce the country's pork production by 25%-35%, resulting in increased demand for other animal proteins but lower demand for feedstuffs, the report said.

Rising demand for beef could constrain China's milk production if dairy cow culling accelerated to fill some of the gap in animal protein demand.

Simultaneously, fewer pigs meant lower demand for feed, which had negative price implications for key dairy ingredients such as milk permeate, whey permeate, whey powder and lactose, which were all used in swine feed.

While lower Chinese milk production would normally have a positive effect on longer-term global milk prices, the larger downward pricing pressure on the whey complex was expected to have a more immediate effect on farm-level milk prices in key exporting countries.

China's pig industry was a large consumer of dairy-derived animal feed. Prior to the African swine fever outbreak, China slaughtered nearly 700 million pigs annually which, on average, consumed 400g of lactose over their lifetime.

Rabobank estimated up to 60% of the whey, permeate and lactose imports were used in animal feed.

With a much lower herd size expected this year, China's demand for feed-grade whey, permeate and lactose would also shrink.

The first signs of lower year-on-year Chinese whey and permeate imports in the second half of last year appeared in November, and the decline expanded to 27% year on year in March this year, according to global trade data.

China's whey and whey permeate imports from the US were hit particularly hard, falling 60% compared with the previous year.

Rabobank's view was that the effects of African swine fever were not short-lived and that it might take years to replenish the pig numbers that had been lost.

Therefore, the demand for dry whey, permeate and lactose would be lessened, lowering the potential returns to cheese and whey manufacturers through that period.