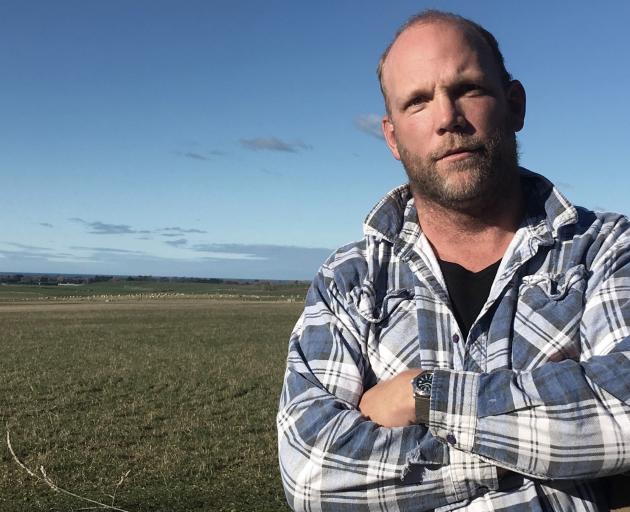 Waimate farmer Carl Jensen says people need to be aware of the impact that Mycoplasma bovis has on farmers. PHOTO: SALLY RAE
Next month will mark two years since bacterial cattle disease Mycoplasma bovis was first confirmed on a South Canterbury dairy farm. Agribusiness reporter Sally Rae speaks to Waimate farmer Carl Jensen, who has first-hand experience of the outbreak.

"As soon as you get that phone call, 'hi, it's MPI', the anxiety journey has started."

Carl Jensen has traversed that road - with many twists and turns - since becoming caught up in the Mycoplasma bovis outbreak in April last year.

The Waimate farmer has come out the other side; restrictions to his farming operation have been lifted, compensation has finally been paid and his business is back on track.

While it would be easy to close the chapter on his experience with the disease, he is doing his best to help other farmers deal with the process, and help bridge what has seemed, at times, a gaping chasm between farmers and the Ministry for Primary Industries.

"We've always said, bovis is one thing but MPI is another thing you're going to deal with. What can we do to change it?" he said.

Mr Jensen is part of a Mycoplasma bovis Affected Farmers Group, a group of farmers who have been endeavouring to "get farmers to talk with farmers".

In October, the group had a meeting with Geoff Gwyn, who is heading the response, and MPI director-general Ray Smith "trying to make things better".

It was all about the procedures in place and also communication through the process. He acknowledged changes had been made but they could often take a long time to "filter through the system".

MPI was trying but a lot of those involved with the response did not have an understanding of practical farming, which was an issue, particularly when it came to the farming calendar.

It was getting better at trying to get people in those areas while communication from MPI had also improved but it was difficult to know what issues existed unless people talked, Mr Jensen said.

"As far as we know, it could be miles better out there and we don't hear about it, or there could be a lot of issues and people won't talk.

"It's trying to get people to talk. If you could just get a group of farmers to have a yarn at the pub, talking about their experiences. What they've been through might help people coming in," he said.

If there was more information for affected farmers from the beginning, so they could understand what was coming, what could happen and have some time-frames, it could help them go forward.

"If they don't get that information, by the time they get in the middle [of it], they're in a mess. They're wound up like a rubber band. They will make wrong decisions and do things wrong because they're a nervous wreck," he said.

"A lot of people have just had enough, they've been dragged through it for over a year. They wanted to make a difference but, against a government agency, it's hard.

"That's the thing; a lot of people are over it. They just want MPI out of their life and move on. That's why we've got a foot in the door a little bit to try and help procedures. We've tried to work with MPI to make procedures better.

Mr Jensen was taking a pragmatic approach, saying he did not want to be the "grumpy farmer going for MPI's throat" - "but I don't want to be 'everything's rosy'."

"There were those that wanted blood. They want an inquiry, they want this [eradication] stopped. But it's here ... we have to deal with it.

"We've got to deal with the procedures, the process. If we can help with the processes MPI put in place to make them more user friendly to farmers and MPI, it'll give you confidence going forward.

"Things have improved. Are things perfect? No. Is there room for improvement? Yes. If everybody was prepared to be an open book and learn and work together on both sides and stop pointing fingers."

"You've got to realise it's a Government organisation ... nothing is ever simple. It's just how it is."

The Waimate property Mr Jensen farms with wife Rebecca and their family was the 52nd farm confirmed infected since the disease was first detected on another South Canterbury farm in July 2017.

The family ran a grazing operation and one of their two graziers was confirmed as having the disease in his herd.

Once they received that call, the "goal posts kept moving" and communication from MPI changed all the time, Mr Jensen said.

Initially, they were told all stock on the property would be killed. When the decision was made by the Government and industry to pursue phased eradication, they were one of the first properties where not everything was killed.

About 500 animals belonging to one grazier were dispatched to slaughter, while their other grazier "fought" and managed to get his stock home.

Unable to take on their usual winter grazing of cows, the Jensens managed to do other things to mitigate their losses, including buying in sheep.

They also had to do "a lot of pushing" themselves and they were fortunate they had two very good ICP (incident control point) managers to deal with.

"I would talk to them two or three times a day and they would return their calls. I know of other people that didn't have that.

"The ICPs aren't really given a lot of information and they are the ground floor person trying to deal with it. We had to push a lot and it's just the squeaky wheel that gets oiled," he said.

Sometimes their calls fell on deaf ears: but "if you keep nudging, eventually you get yourself through".

"It's just trying to keep your cool. You'd talk to someone, they'd give you an answer. You'd say, 'can you give me a ring with an update every week with what's going on?'

"If nothing happens, then you have to start pushing. Even if it's bad news, a farmer would rather that than being kept in the dark," he said.

"There are personalities that clash and we know that's in a lot of cases. We found just keep nudging through. If a personality didn't suit, keep nudging."

"A lot of people, they get wound up and that's it [but] they [MPI] are doing their job, what they were told to do. They're just the person in the middle that has to deliver the bad news."

Mr Jensen's wife and workers would attest to the amount of time that he spent on the phone. He was on it constantly and it was not just to MPI but to other key people in his farming business, including the bank, to keep their business operating not only for themselves, but also conscious of the responsibility to their workers.

"My motto is to talk to as many people as I can in this industry to try and help me get through. I think the biggest thing is to try and look outside the square to mitigate your losses. You can't depend on MPI to help you, you've got to help yourself," he said.

Initially, they decided they would never graze stock again but now they had done a "complete circle" and were back to grazing, keeping it to two graziers. They were not trading any stock to minimise risk.

There is no doubt that Mycoplasma bovis has had massive ramifications for those with the misfortune of being caught up in it.

It has not just been the whopping animal toll - more than 100,000 animals have already been slaughtered in the bid to eradicate the disease from New Zealand's shores - but so many heartbreaking stories of the human toll.

Of years of hard work loaded on to stock trucks to be sent away to slaughter, a family forced to walk away from the property they had farmed for nearly 100 years, and of rumour mills and gossip and "demonising" of people that have become part of the testing process.

That stigma had got better, Mr Jensen believed. As for their own experience, "it sucked", he said simply.

"It wasn't very good for us. People that would talk to you didn't. You got looked at differently. That's how we felt. It took a toll on our kids a bit.

"You've got to remember the farmer, he hasn't done anything wrong. But sometimes that's how they are getting treated - like they are criminals," he said.

MPI has repeatedly said that lessons have been learned throughout the response.

"They are the first to admit they have been learning. That has been at the expense of people.

'They [MPI] will keep saying they're learning. If you sent your kid to school and they didn't learn anything in two years, what the hell are they doing?

"I think people just need to be aware there's the impact it has on a farmer when they have it. Even ... getting back to business, it has changed their whole business.

"It's just taken a toll, that human toll. The saying is a group of farmers is taking a hit for the team. How many hits can one person take?"

When it came to compensation, Mr and Mrs Jensen had to submit three years of financial accounts and their claim was also assessed seven times.

MPI has always said there was a need for robust process given that it was taxpayer money that was being spent.

But Mr Jensen said: "if you want us to explain our business to get our money, you explain what you're doing".

A lot of farmers had animals killed that, as far as they were concerned, were "fine" - they had no symptoms or signs of the disease and appeared healthy. "And you've [MPI] come along and killed [them]."