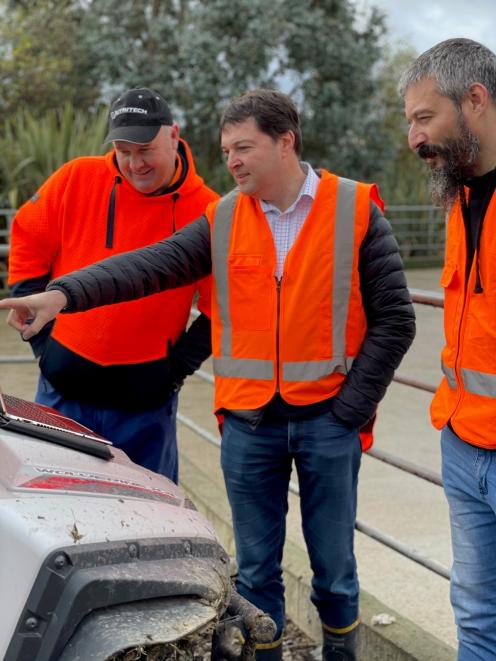 Looking at new technology that provides farmers with real-time details of the health of their dairy herd are Pamu Landsdown farm manager Matthew Hamilton (left), Iris Data Science managing director and co-founder Greg Peyroux and lead data scientist and co-founder Benoit Auvray. PHOTO: GEORGE DAWES
Dunedin-created technology, designed to provide farmers with an "intelligent eye" over the health of their herds, will be launched at Fieldays at Mystery Creek next week.

Iris Data Science, which also created the world’s first sheep facial recognition system, is piloting the technology on five dairy farms in the lower South Island and hopes to extend to about 50, allowing it to develop it further.

The automated on-farm monitoring system, powered by artificial intelligence software, allows for early detection of conditions such as lameness, an issue which costs the dairy industry millions of dollars.

It uses a non-intrusive on-farm camera and monitoring system that collects tens of thousands of data points from every cow, every day, to provide an "intelligent eye" over livestock.

The visual identification of the cows used a technique similar to the sheep facial recognition software developed earlier by the company, co-founder and managing director Greg Peyroux said.

The first product, OmniEye Locomotion, allowed for early detection of lameness and drafting of animals. Farmers received real-time information they could action, either automatically or manually drafting cows requiring treatment, and it also allowed for remote diagnostics by a vet.

Another product, OmniEye Diary, gave visual verification of an animal’s condition over time to provide better understanding of the health of the herd.

It got the company thinking and the team realised sheep "probably wasn’t quite where it needed to be at the moment and adoption would probably be low".

Shifting the focus to dairy cattle, the key issue identified was lameness but hopefully the technology could also be used for other things such as body condition, Mr Peyroux said.

Lameness was a huge issue for farmers in New Zealand, costing the dairy industry about $500million every year, Mr Peyroux said.

If that could be halved, then that would be $250million "going back into farmers’ pockets".

It was not just about the cost of veterinary treatment and the implications of withholding periods and milk quality, but also the effects on production and animal welfare, he said.

Iris Data Science entered the technology in the innovation awards at Fieldays which opens on Wednesday and runs until next Saturday. Described as the southern hemisphere’s largest agricultural event, in 2019 it drew more than 128,000 visitors.

Mr Peyroux said it was hoped his firm’s technology would attract public interest while "all the industry players" would be attending.

He expected it to be an exciting but intense week.