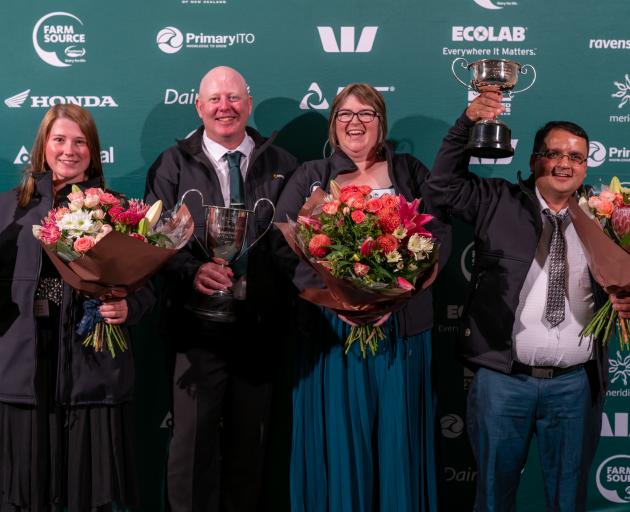 Celebrating their victories are (from left) Alexis Wells, Noel and Louise Rockell, and Krishna Dhakal. Photo: Supplied
Women won all three placings in the West Coast-Top of the South Dairy Trainee of the Year competition.

The awards were presented at the West Coast Events Centre in Shantytown on Tuesday last week.

Ms Wells (21) is a farm assistant on a 307ha, 670-cow Pamu Farms of New Zealand property in Reefton. She is studying level 4 husbandry and feeding with Primary ITO and said she was proud to have made it to the dairy awards finals three years in a row. Her goal is to the win the national title.

‘‘I love the challenges dairy farming brings and love working with animals each day.

‘‘I am always learning new things and love the lifestyle. My dream is to own my own farm in the future,’’ she said.

‘‘We love cows, grass, being outdoors and the challenges it brings,’’ they said.

‘‘Entering the awards has enhanced our personal development and has been made possible by having supportive farm owners.’’

The Rockells own a business called NLR Pastoral Ltd, designed and developed the ‘‘Cowculate’’ pasture management app and have 25 beehives producing honey, which they sell locally.

A man who began his dairying career in Saudi Arabia, Krishna Dhakal, was named the West Coast-Top of the South Dairy Manager of the Year.

He said overcoming the language barrier had been his biggest challenge since coming to New Zealand.

Having completed Primary ITO levels 1 to 5 courses, he is now studying towards the New Zealand diploma in agribusiness management.

He enjoys taking part in discussion groups, building, gardening and helping people in his community.

Rachael Lind was second and Luke Chisnall third in this section of the awards.

A field day that was to have been held on April 7 at the farm where Mr and Mrs Rockell are contract milkers has been cancelled.

The Canterbury-North Otago regional awards dinner that was to have taken place in Christchurch last Friday was also cancelled, and the national final in Auckland on May 16 May has been postponed until further notice.