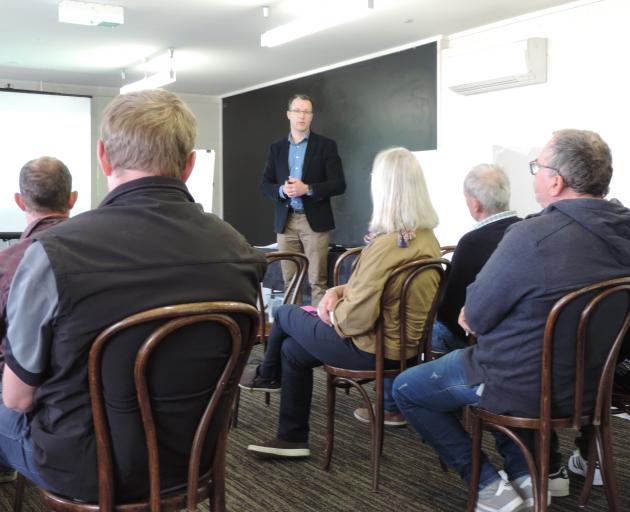 ‘‘Farmers care more about what they’re doing and why than making money,’’ he told a small group of farmers at the recent Oamaru ‘‘Offload, reload, refresh’’ meeting.

Dr Mackle said milk payouts were good, but farmers were still concerned about their situation and wanted to be valued.

European farmers were also worried, but their main concerns were climate and animal welfare, while ours was water.

‘‘I’m extremely optimistic about the future,’’ he assured the gathering.

As a scientist who had studied nutrition overseas, Dr Mackle said milk was ‘‘a fantastic product’’ with readily absorbed nutrients. When assessed on a greenhouse gas basis, it was ‘‘amazing’’.

‘‘That’s starting to get recognised.

‘‘Public perception is the key thing.

‘‘The biggest issue that seems to be on the table for the public is water.’’

The dairy industry had owned its own problems and DairyNZ was putting a lot of work into that perception, getting farmers to tell their stories of sound environmental practices and improvements to ‘‘set the record straight’’.

‘‘We’re a science-based organisation. The emotional connection is best driven by farmers.’’

For every dollar of levy funding received, DairyNZ spent 27 cents on farm systems and resilience, 22c on biodiversity, 12c on the environment, 10c on people, 8c on forage research and development, 5c on communities, and 3c on animal care.

‘‘We weren’t investing so much in the environment 10 years ago,’’ Dr Mackle said. It was mostly spent on water issues now.

‘‘We’ve got one of the top three science teams for water in New Zealand.’’

DairyNZ was collaborating with Australia on hybridisation, which had never been achieved in pasture plants, he said.

He did not believe DairyNZ should lead debates on whether New Zealand should introduce genetically engineered plants.

‘‘My view is that the moral compass will shift.’’

The timing was ‘‘not quite right yet’’, the technology was ‘‘not there yet’’ and the current Government ‘‘has a very low appetite for it’’.

‘‘We can’t even talk about gene editing, and that’s been approved in Australia.’’

Methane emissions were another contentious topic.

New Zealand farmers were the most efficient producers of milk in terms of carbon footprint, Dr Mackle said.

‘‘By 2022, we need to have made sufficient progress and have enough farmers who know their numbers. That’s got to be planned in the next few months.’’

Trials were being carried out on farms in Selwyn, Aparima and Tararua.

Laboratory-grown protein, identified by farmers as a ‘‘burning issue’’, needed to be compared with animal-based protein on a carbon basis, Dr Mackle said.

The discussion also had to consider the cost of producing the nutrients and how readily absorbed they were.

‘‘You can’t synthesise milkfat. We’ve got to find a place where our products have special value.

‘‘If milkfat is too dear, it’s substituted with palm oil.

‘‘We’ve got to keep farming well and telling our story.’’