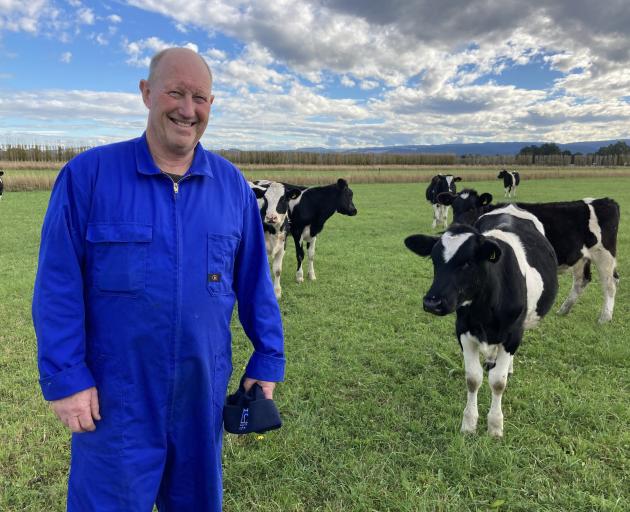 South Taieri dairy farmer David Wilson with his award-winning Friesian heifers. PHOTO: MARY-JO TOHILL
When you have won as many heifer titles as David Wilson, you would be forgiven for thinking why bother with all the effort of entering competitions.

He has won the South Island-wide title three times and been runner-up twice.

However, the gongs are not everything, says the South Taieri dairy farmer who has lost count of the number of southern district competitions he has won with his purebred Friesian calves.

To the fourth-generation farmer, it is all about taking part.

"It also gives young people who are coming into the industry an opportunity because then they can come in and say, OK, my calves are at this level, I need to do this and this to get them to being as good as the ones that won the competition whoever that may be, so that gives you a little bit of an incentive, for all those young guys to come forward and improve," Mr Wilson said.

For instance, his neighbours and first-time entrants Gregor and Lynne Ramsay placed second behind him in the 2021 Combined South Otago, Tokomairiro and Otago-Taieri A&P Dairy Heifer On Farm Competition.

"That’s why I’d like to see more and more enter the competition, because it’s not about who wins, it’s about entering and gaining the experience and the knowledge of what you have to do to grow good calves. So that’s what it’s really about, and the sponsors we have make that all possible."

Mr Wilson, along with the Morrison family of Inch Clutha (in-calf heifer section), were the South Otago-Taieri finalists in the Southern District Royal Agricultural Society On Farm Heifer Competition, which was judged on April 13.

The judges look for size, conformation and presentation. They look at the calves as a line, across all breeds, including cross-breeds.

If you were worried on the day about what you had not done, it was too late, Mr Wilson said.

"It’s what’s happened months and months before that, right back to the decision of what bull to use, who the sire’s going to be, the mating and all those decisions — it’s an ongoing thing.

‘‘Farmers are always looking a long way ahead, so when it gets to judging time, they’re either good or they aren’t at that point."

Mr Livingstone is the Otago-Southland event convener and has been involved for 20 years.

The standard was very high, he said.

"They were top animals, and there was nothing in it, and only a point between the one that was better. A different judge, and it could gone a different way. It was the tightest I’d seen it."

Mycolplasma bovis then the pandemic had played a part in curtailing competition in some regions latterly. There were no Central Otago or North Otago entrants this year, and without Tasman and Canterbury events, there would be no South Island Dairy Heifer Competition and Calf competition this year.

But he was happy to have revived the competition in the southern districts.

"I’m pleased to get the competition going again after Covid. There were good entries. It was good to see South Otago and Taieri so involved."

The competition is always held after Easter or by mid-April, in the event of a South Island-wide competition happening later in the month, and before the heifers are brought in on May 1, and the calves go out.