Lack of Kiwi workers a problem 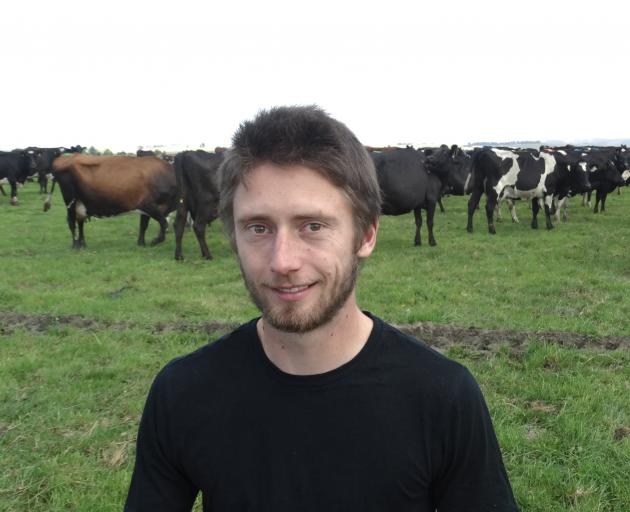 Adam Judd (28) is one young New Zealander not regretting getting into the dairy industry. Originally from Dunedin, he worked on a dairy farm in the holidays while studying for a BSc and found he enjoyed it. He is 2IC on a 700-cow dairy farm near Pleasant Point. Photo: Chris Tobin
Young New Zealanders are still slow in coming forward to work in the dairy industry and it's becoming a mounting problem, not just in dairy, but also in other sectors.

South Canterbury Federated Farmers dairy spokesman Ads Hendriks said he advertised a position in recent months and only one of the nine applicants was a New Zealander.

''Two were Filipinos already on a farm in New Zealand, two were Indians also on farms here and then there were four others from India.

Mr Hendriks said he was always keen to employ a Kiwi, but it was not always possible and there were a lot of issues involved.

Federated Farmers has reported that the situation is deteriorating and is not confined to the dairy sector - it includes meat/wool and arable farming too.

In the January Mid-Season Farm Confidence Survey, nearly half (42%) of 1400 farmers who answered a questionnaire said they continued to have difficulties recruiting skilled/motivated staff and things had deteriorated in the past six months.

Mr Hendriks said there were still keen young New Zealanders getting into the industry and the rewards were there.

''We still see young New Zealanders coming through who are really enthusiastic.

''Older staff members have gone on to contract milking and are doing very well. This is still an industry you can start small and gain quite a bit of financial clout.''

Attracting Filipinos has been made difficult as the Philippines government was making it harder for people to apply to come to New Zealand, Mr Hendriks said.

''There seems to be more interest from India but the Government seems to have gone cold on that.''

Mr Hendriks said in general there were ''not enough hands in rural areas''.

The new government rules of overseas workers being able to stay for three years and then standing down was frustrating, he said.

''You introduce people, teach them for three years and the Government says you can't get a visa until a year or two.''

As a result, workers were moving to places like Canada, Sweden and Australia, Mr Hendriks said.

And in rural areas there were New Zealanders who were either not work-ready or did not want to work in the industry.

''Quite often I hear the argument that we're bringing people in to replace Kiwis because we don't pay them enough.

''My lowest paid worker earns more than $50,000 and has a house and I'm sure that's widespread in the industry.

''Most of the best performers (work-wise) are foreigners.''

''No question, farmers would rather employ fellow New Zealanders.

''We started a dairy apprenticeship scheme to foster talent and we're looking at expanding that to other farming sectors.

''But we've got very low unemployment in many rural areas and we're in a battle with roading, construction and infrastructure industries for the kinds of young people that have long been the agriculture workforce's 'new blood.'

''We're losing the battle for younger people who tend to be swayed by the social life, shops, McDonald's and bustle of towns and cities.''