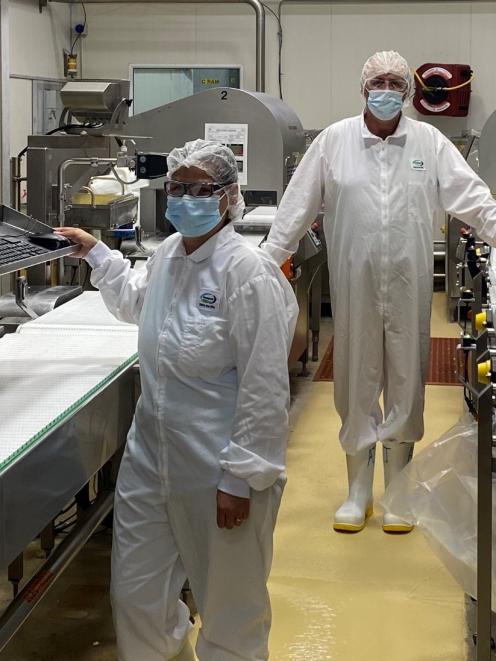 The midpoint of the range, from which farmers are paid, has increased from $8 to $8.40.

That higher midpoint would equal the highest farmgate milk price paid by the co-operative and would result in almost $13billion flowing into regional New Zealand through milk price payments this season.

About 80million litres of milk was processed a day in New Zealand in peak season, Mr Watt said.

The Southern sites were processing more than 13.3million litres of milk a day.

The peak volumes were weather dependent but were expected to continue in Edendale until the end of the year but would continue for longer at Stirling.

‘‘At Stirling we process 1.8million litres a day and we’ll be at that until the end of May — it doesn’t go away for us — it just keeps on coming.’’

The Stirling plant operated 24/7 for nine months of the year and employed about 110 staff, including tanker drivers.

More than 600 staff were employed at Edendale.

The staff were in their third season of taking Covid-19 procedures and precautions to continue operating and processing milk.

‘‘We are doing pretty well — the cows don’t know there is Covid out there and they keep on processing.’’

The Covid-19 measures went beyond what the Government mandated, Mr Watt said.

‘‘We are pretty cautious.’’

Measures include staff wearing masks and allowing only essential workers on site. That included closing the on-site shop at which cheese was to the public.

‘‘It hasn’t been opened for a couple of years now, which is a shame because it services the community but it is what it is, right?’’

Speaking to Southern Rural Life on the day it was announced there were positive Covid-19 cases in Christchurch, Mr Watt said it was too soon to tell how it might impact the plant but Fonterra was prepared.

‘‘We will get to a point where we really knuckle down and step up our controls — which we’ve done before.’’

In a statement, Fonterra chief executive Miles Hurrell said the rise in milk price was a result of continued demand for New Zealand dairy relative to supply.

‘‘We have seen demand from China ease over the past couple of months, while other regions have stepped in to keep demand firm,’’ he said.

‘‘On the supply side, overall global milk supply growth is forecast to track below average levels, driven by a slowdown in US production due to the increased cost of feed.

‘‘These supply-and-demand dynamics are supporting the current pricing levels, and a higher contract rate has given us the ability to narrow the forecast range.

‘‘While the increase in milk price can put pressure on our input costs, we remain comfortable with our current 2021-22 earnings guidance range of 25c-40 cents per share.’’

Mr Hurrell cautioned it was still early in the season, a lot could change, and there could be increased volatility when prices were high.

‘‘This is why we’re maintaining a plus or minus 50 cents forecast range, reflecting the continued uncertainties at this point in the season.’’

He said the co-operative was keeping a close eye on factors that could affect demand, including the Covid-19 pandemic’s continued effect on global markets, growing inflation pressures, volatility in exchange rates, New Zealand weather conditions and possible ramifications of geopolitical issues.

Let's hope that the dairy industry puts some of these massive profits aside for dealing with the problems they have created with river systems.