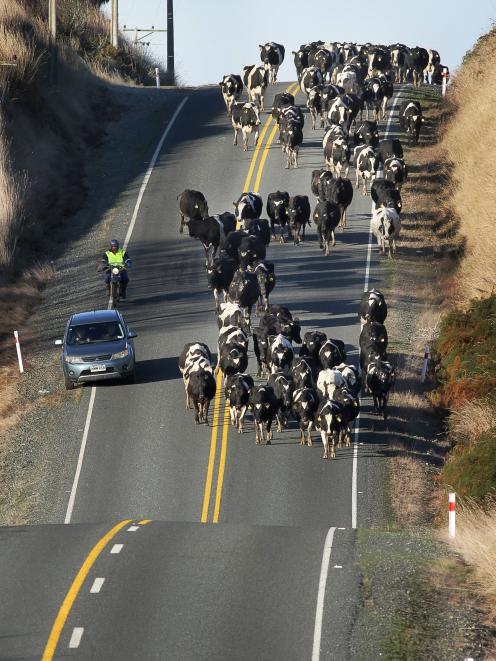 Significant uncertainty remains about what will happen with global dairy prices over the next 15 months. PHOTO: JOHN COSGROVE
Fonterra has posted a much improved lift in earnings for the first nine months of the financial year and announced an opening forecast farmgate milk price for the new season of $5.40-$6.90.

The co-operative’s total group normalised earnings before interest and tax (ebit) for the nine months to April 30 was $815 million, an increase of $301 million on the corresponding period last year.

It has narrowed its 2019-20 forecast farmgate milk price range to $7.10-$7.30 — meaning an injection of about $11 billion to the New Zealand economy for the year — in response to a softening of demand relative to supply which was pushing down prices, chairman John Monaghan said.

‘‘One of the main drivers of the softening demand is that many foodservice businesses remain closed.

On the supply side, the EU and the US have just passed the peak of their season and that milk is flowing into export markets and increasing competition for sales.

As a result, prices are softening across the board,’’ he said.

In US dollar terms, GDT prices for whole milk powder were down 17% since late January.

Looking out to next season, a global recession would continue to reduce consumers’ purchasing power.

Covid-19 added significant uncertainty into forecasting what would happen with global dairy prices over the next 15 months and the wider range for the opening forecast reflected the increased uncertainty, he said.

Chief executive Miles Hurrell said the work done over the past year to strengthen its balance sheet and the co-operative’s ability to respond quickly had helped it manage the Covid-19 situation over the past few months.

All three of Fonterra’s business units had delivered a good performance for the year to date, despite the negative impact of Covid-19 on the food-service business in the third quarter.

Its ingredients business delivered a normalised ebit of $668 million in the nine months to April 30, up 9% from $615 million this time last year, mainly due to improved margins, Mr Hurrell said.

Overall food service ebit for the year was $208 million, up 54% from $135 million, although that was the part of its business most affected by Covid-19.

Overall, consumer ebit was $187 million, up 46% from $128 million on the same period last year, due mainly to cost savings across all regions and gross margin growth in Asia, he said.

The co-operative had a strong balance with good cashflow and was continuing to reduce debt. Mr Hurrell reaffirmed the FY20 forecast underlying earnings guidance of 15c-25c per share.

ASB senior rural economist Nathan Penny said the financial results were encouraging but much work needed to be done to repair the damage of previous poor performance.

The fact it had not announced a dividend indicated the business was still in ‘‘repair mode’’.

This week’s GDT auction saw a slight 1% rise in the headline price index, a slightly better outcome than the market had expected.