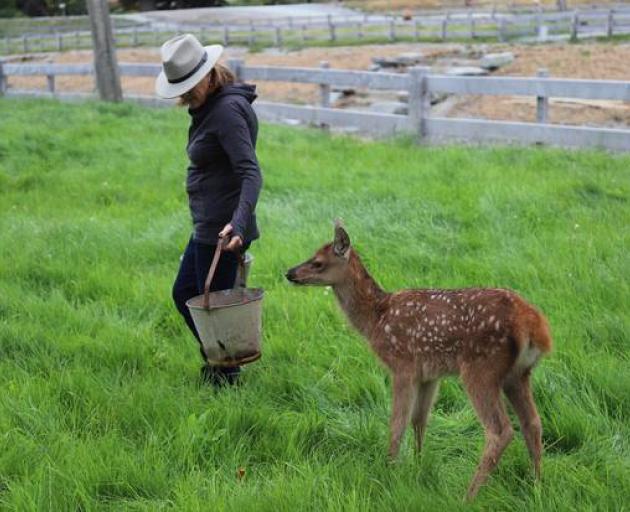 The protein-rich milk is attracting interest from scientists. Photo: Supplied via NZ Herald

His Kotia beauty brand will be presented to more than 70 industry buyers and media flown into the resort town this month.

A significant distribution deal for the skincare has already been arranged here and in Australia in partnership with McPhersons Consumer Products. This will see the products in the big Priceline pharmacy chain and locally in selected Green Cross (Life and Unichem) pharmacies and Farmers stores.

But it is the vast Asian market which ultimately offers the most export potential.

Shaw has been pioneering mechanised deer milking since 2012, initially for cheese making. It's a tricky business, with the highly strung animals currently only milked on a handful of South Island farms.

The protein-rich milk is attracting interest from scientists. Shaw has had it analysed by AgResearch in Hamilton and has done clinical trials with Lincoln University to better understand its potential. "We've identified some other properties in the milk that we'd like to develop," he told the Herald.

He's not alone in seeing the industry's potential. Pāmu, the brand representing state-owned farmer Landcorp, signed a supply deal in December with a South Korean pharmaceutical company, Yuhan, to provide deer milk for skincare which Yuhan said would go to market this year. Pāmu has also been providing deer milk to chefs.

While Shaw is focussing on deer milk skincare for now - where the milk's hydrating and nourishing properties have obvious application - areas such as ingestibles are of longer-term interest. He is now working with milkers in South Canterbury, after being the driving force behind the first successful deer milking trials in Otago in 2012.

Shaw believes New Zealand, with the world's largest population of farmed deer, has a unique opportunity to develop a valuable deer milk dairy industry. Those in the deer farming industry are watching developments with interest, he says.

"They're all sitting back waiting to see if there's a market."

He's convinced there is, saying other countries can't just conjure up 900,000 deer so this, combined with excellent market potential, gives New Zealand a great opportunity. We should look to value add here, rather than export raw ingredients, he maintains.

Now approaching 60, Shaw says: "I'm always looking to see what we can do better to promote New Zealand."

He's passionate about the country he grew up in and returned to with his young family after establishing a large physiotherapy practice in Sydney.

Shaw founded Queenstown's renowned Matakauri Lodge, stocking it wholly with New Zealand wine and food, and seeing it named one of the World's Top 50 Hotels by travel bible Conde Nast before selling it on.

It was his first and very hands on building project and sparked an interest in further property development of high-end apartments in both Queenstown and Sydney. He's happy to see Matakauri (now owned by the Robertsons of Kauri Cliffs and Cape Kidnappers renown), back on the luxury tourist map.

He's also glad he listened to his father's advice, that having three careers is a good way to keep up interest levels in working. So from physio, to property, it's now red deer and New Zealand's bountiful potential that keep Graeme Shaw from retiring.

In China, where deer velvet is prized, the animal is associated with wealth and wellness. The distinctive hides of rare white deer were used in the first century BC as an ancient form of leather currency "notes."

In the 18th century, early settlers and native Americans also traded goods for deer skins — often referred to by the male deer name as "bucks" — giving rise to the still used expression of a "buck" for a US dollar.