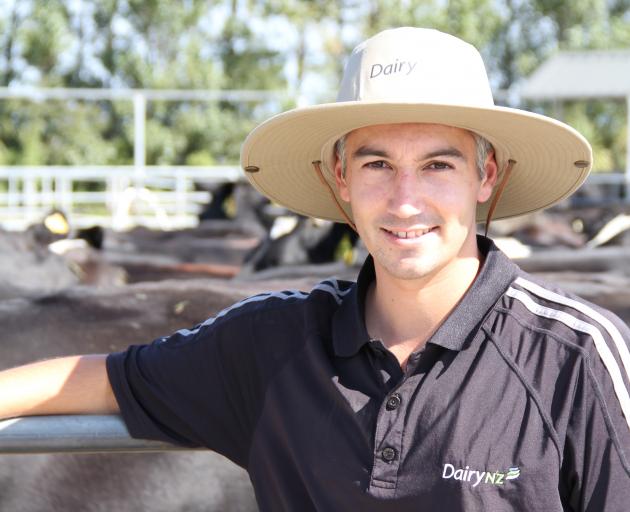 Dr Paul Edwards is in charge of the three-year Flexible Milking for Healthier People and Cows project, which is researching the impact and outcomes of three milkings over two days on dairy cows, production and staff. PHOTO: SUPPLIED
DairyNZ and research partners including Lincoln University are exploring flexible milking options, including variations of three milkings over two days, which some Southland dairy farms are already using.

Dr Paul Edwards, of DairyNZ, said the three-year project was launched in July and would look at the implications that various versions of three milkings over two days would have for production, as well as stock and staff welfare.

"We want to build a great workplace for the world's most talented workforce," he said.

"Milking is a time-consuming task and requires half [a farm's] annual labour input.

"In terms of trying to improve workplace attractiveness, milking is a good place to start."

Flexible Milking for Healthier People and Cows is funded by the Sustainable Farming Fund, which contributed nearly $500,000, with a further $300,000 contributed by DairyNZ levy payers.

The programme will run until June 2022 and farmers will be informed of outcomes and progress along the way.

During the first year, researchers on the Lincoln University Research Farm will use four herds on four farmlets.

Twice-a-day milking will be the control, while the other three will have various versions of three milkings over two days, including three in two from March, three in two from December and three and two for the full season.

They will look at production gains or losses and system-level effects, allowing an economic analysis.

Dr Edwards said a form of the three-in-two milking strategy was in place on some Southland farms, especially during drier periods.

"My observation is about 30% [of Southland farmers] might use it from March for the last couple of months before drying off.

"They use it as a grazing rotation tool, for putting on body condition scores (BCS) and reducing lameness.

"The question is, how early can you go with it?"

He said the three-in-two strategy would mean a better work-life balance with fewer hours' work and a great flexibility for time off or time available for other duties.

During the term of the project, they wanted to explore how the change would impact cows, which would spend 25% less time in the dairy, and to look at animal health and behaviour, reproduction performance, grazing, lying time, rumination and BCS.

If the BCS improved, would it result in improved reproduction and then a need for fewer replacement cows?

They would also look at pasture production and grazing management.

They intended to interview farmers who were earlier adopters - including some from Otago and Southland - in November to find out what they had learned and what decision-making process they went through.

"There is no point reinventing the wheel," he said.

He was also looking for three commercial farms for the project, nationally.

By year two, they intend to evaluate the effects of the system on people, as well as the benefits or drawbacks of various versions of three in two.

They will also look at the effect of extending milking intervals to 21 hours once a week.

This would enable two milkings to be completed on Monday, Wednesday and Friday, with one milking each on Tuesday, Thursday, Saturday and Sunday.

By year three, they will be looking at using the acquired data to model outcomes for the different flexible milking scenarios.

If anyone would like to sign up to receive project updates, they can do so at dairynz.co.nz/3in2.