All ages pitch in to plant trail rest area 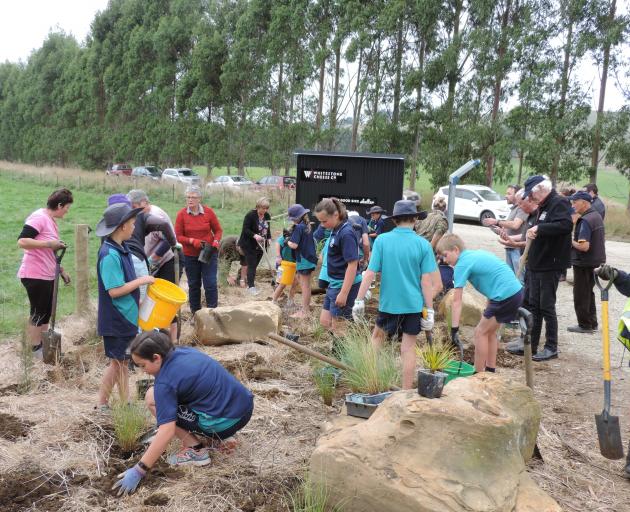 Farmers Duncan and Evelyn Taylor gave some of their land so the cycle trail could be created safely away from public roads between Duntroon and Oamaru.

Then they recommended a way to make a pick-up bay and rest area more appealing.

Mr Taylor found large boulders on the farm and they have been used to landscape the site, where a three-sided shelter provides a place for cyclists to stop and sit for a while.

Getting ready to plant tussocks along the Alps 2 Ocean cycle trail through North Otago farmland last week are (from left) Oamaru Rotary Club member Alex Regtien and Maheno School pupils Rosa Black (9), Storm Shanahan (11), Angus Isbister (9) and Zara-Jade Pope (12).
They are protected against the prevailing wind and can look across the landscape.

The shelter has been sponsored by award-winning Oamaru business Whitestone Cheese, the ''guardian'' of that section of the trail.

It has adorned the inside with information about the land its raw ingredient comes from.

Alongside is a ''Pride in the Kakanui'' map, one of a

series installed as part of the Kakanui Community Catchment Project aimed at improving the Kakanui River's water quality and biodiversity.

The sign and its installation were sponsored by DairyNZ.

The pupils had drawn artworks on the triangular protectors placed around each plant.

Duntroon School principal Kathryn Sim said it made them ''a bit special''.

The children would be caretakers of the plants as they became established over the next two to three years, Mr McTague said.

Tourism Waitaki oversaw the development of the rest area, and Fonterra was there to give the planters ice creams as a reward for their work.