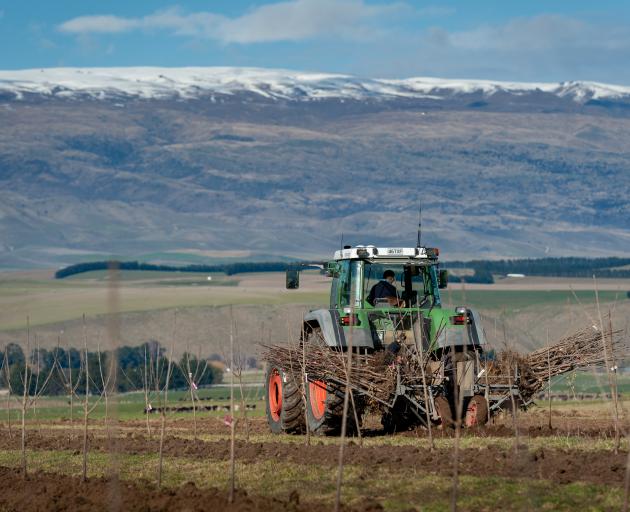 The first of 7500 cherry trees are planted at Hortinvest's Lindis River project. The project is one of three major cherry developments led by Hortinvest in Central Otago. Photo: Supplied
The first 12ha in Hortinvest's $15.5million Lindis River cherry project have been planted after four cornerstone investors committed to underwrite stage 1 planting.

A total of 7500 trees had been planted and a further 23,000 trees would be planted next winter in stage 2, a statement from the New Zealand horticultural investment company said.

The project - on Lindis Peaks Station - spans 80ha and the first fruit is expected to be harvested in the summer of 2021-22.

Hortinvest marketing and sales manager Sharon Kirk said the Lindis River project was 40% subscribed as negotiations continued with several large corporate investors from New Zealand and overseas. She said the company was pleased investors had started the project while continuing to finalise other applications, as winter planting was critical for optimal cherry production outcomes.

''It's best to plant when trees are dormant and the effects of transplanting are minimal.''

The Lindis River is one of three major HortInvest cherry projects in Central Otago.

Stage 1 planting for another $15.5million project - also on 80ha, on Mt Pisa Station, near Cromwell - is scheduled to begin next week.

The Tarras Cherry Corp project, on 40ha, was planted in 2018 and is expecting to harvest its first crop during the summer of 2020-21.

Mrs Kirk said investors for the Lindis River project had until September 27 to finalise their applications, although there was still time for new investors to come on board.

Under its business model, Hortinvest sources land, establishes orchards and packhouses and exports and markets produce, retaining all services in-house.