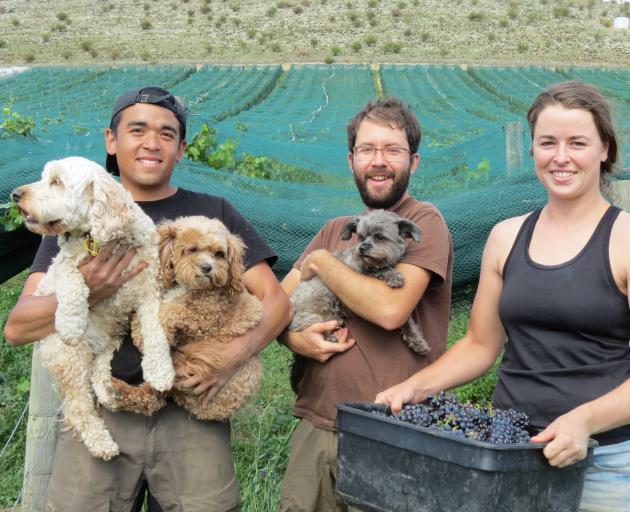 Quartz Reef vineyard interns (from left) Joel Welander, of Sweden, Raphael Servin, of France, and Kiri Spain, of Alexandra. The interns hold the three Quartz Reef Vineyard dogs (from left) Popcorn, Archie and Beau. PHOTO: YVONNE O’HARA
The 2020 Central Otago wine vintage is shaping up to be one to toast despite a cooler summer.

The weather is to blame for later-than-usual harvesting of sparkling wine grape varieties, beginning only yesterday and harvest of pinot noir varieties is up to two weeks away.

Perserverance Estate Vineyard owner Jennie Hughes said the summer had been a challenging one for her grapegrowing operation at Muttontown between Alexandra and Clyde. The lacklustre start to summer had not extended through the whole season, something she was thankful for.

"All that heat we had in the middle of summer pushed things along, thank goodness."

The art of producing wine was all down the the skill of the winemaker but she believed the grapes produced by Perseverance were good this year.

Quartz Reef Bendigo Estate winemaker Rudi Bauer said this year’s sparkling vintage looked to be similar to that of 2017 when conditions in Central Otago were cooler than usual, especially in December.

"That’s depending on where you are. Pinot is down a little, but the whites are where you’d expect them to be."

Mr Dicey said he believed vintages produced in cooler conditions were among the best.