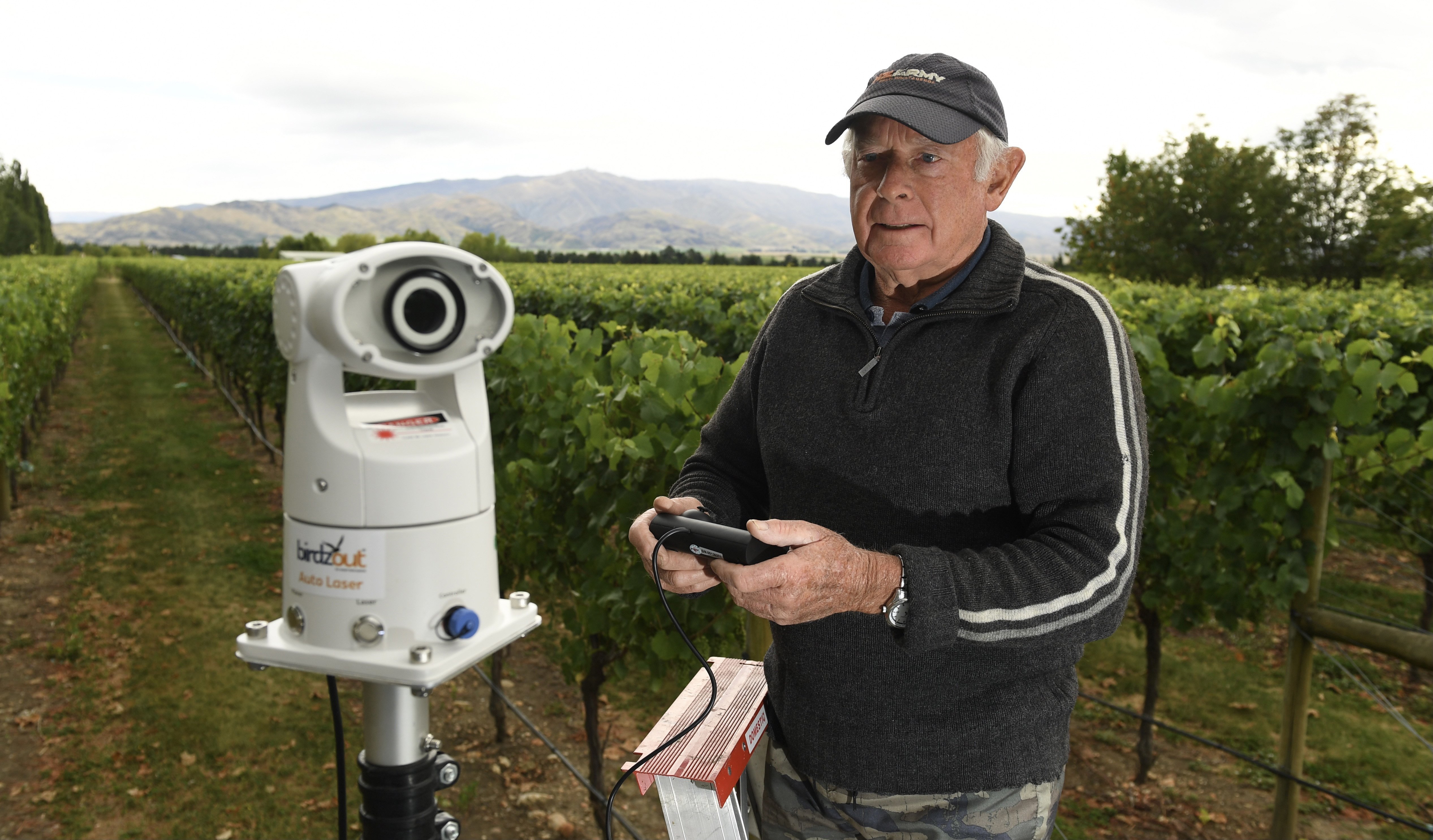 Viticulturist Barry Hunt with ‘‘Birdzout’’ auto bird scare laser to be used at Ewing Stevens’ Anthony James Vineyard near Alexandra. PHOTO: STEPHEN JAQUIERY
Using lasers to control birds might sound like science fiction but Ewing Stevens hopes the technology will save his grapes from the peckish pests.

At age 94, Mr Stevens believes he is New Zealand’s oldest vintner but his age is no barrier to being at the cutting edge of technology when it comes to managing his crop at Anthony James Vineyard near Alexandra.

This week three lasers were installed at his Hillview Rd vineyard to replace labour intensive and expensive bird netting.

Mr Stevens said the idea was born out of a conversation with Viticultura co-owner Timbo Deaker, whose Cromwell-based company manages Mr Stevens’ grapes through its vineyard management service, about three years ago.

"Timbo and I started talking about having to renew the nets."

Those nets, which are set up for up to eight weeks to protect grapes when they are most vulnerable to bird predation, did not come cheap.

Ewing Stevens hopes the technology will save his grapes from the peckish pests. PHOTO: JARED MORGAN
While they last about 20 years, to replace them involved an outlay of about $80,000, he said.

They also took two days to set up with a crew of eight, required ongoing maintenance, and could create a micro-climate, making grapes more prone to disease, Mr Stevens said.

Inspiration came in the form of a wine industry publication.

"It was an article about bird control and it went through the various methods used in America and Australia — one of them was using lasers like those used to control birds at airports."

Similar technology to prevent bird strike to aircraft was being used to control birds in various applications such as bulk grain storage through to grapes, he said.

That prompted to call the magazine editor, who gave him contacts for winegrowers in California and South Australia.

Their feedback was convincing.

"They would never go back to nets."

What followed was a test last year, renting a laser for $5000 rather than buying one for $20,000 from a Christchurch distributor.

"Last year we had one going but still had a bit of bird damage around the edges."

Birds also learned the pattern of movement of the laser, meaning they would swoop in and out again, he said.

"This year we decided to go the whole hog."

He bought three lasers, sourced from Westport-based based company Maintrac Group, at $3500 each.

Used for orchards, vineyards, and for arable crops, similar lasers were installed in Ettrick and had also been used to tackle Oamaru’s red-bill gulls.

The protected birds and the waste they left in their wake was wreaking havoc on commercial buildings in the North Otago town’s centre and the same laser technology was being used there in a bid to move them on, Mr Johnson said.

In the case of Mr Stevens’ vineyard the lasers would not only target birds as they dined out but would also be trained on trees bordering the property, driving birds to nest further away.

Mr Deaker said based on Viticultura’s experience using various systems on vineyards, the system being used by Mr Stevens was the most effective.

Added to to that, 8% to 10% of the operating coast for a vineyard was in the netting.

"If we can mitigate 8% of the cost with no netting that’s a huge advantage to anyone."