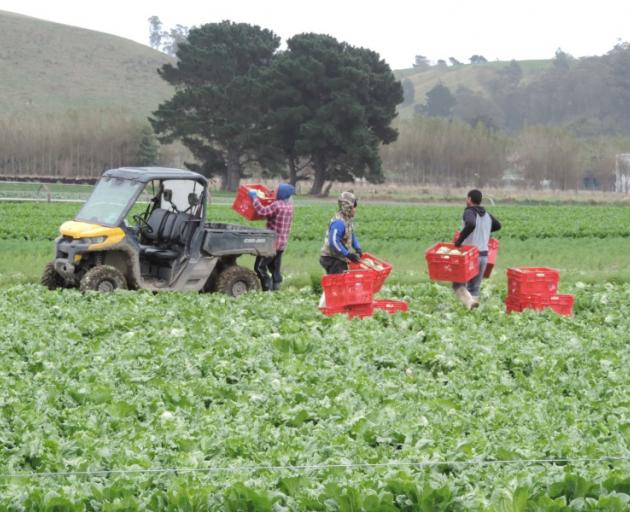 Fresh veg . . . Rangeview Produce staff harvest and load lettuces in a Shortland Rd paddock. PHOTO: SALLY BROOKER
The lockdown has allowed an Oamaru market garden to slow down from frantic to normal.

Rangeview Produce, which grows vegetables on 60ha on the northern outskirts of the town, has kept on all its staff, owner Wayne Wycherley said.

They would usually be working long hours at this time of year, but were now doing a standard 40 hours a week, he said.

My Wycherley employs 10 full-time staff plus casual labour as needed.

They were getting well through the seasonal planting and were picking broccoli, celery, cauliflower and lettuce.

Lines grown mostly for the restaurant trade, such as broccolini or baby broccoli, have ‘‘dried up’’, although the supermarkets take a small amount.

‘‘I look at those lines as a spread of risk.

‘‘In this job, you’re used to taking hits.

Market gardening meant being a price-taker at the mercy of the weather, he said.

‘‘A hailstorm would be worse than Covid.’’

His industry was ‘‘tough psychologically’’, but he was used to it after nearly 40 years. He started out in a small family market garden at the western end of the Manawatu Gorge at Ashhurst.

Twenty-five years ago he moved south to Oamaru and expanded the business in its temperate microclimate and loamy soils. The range of crops include Jersey Benne potatoes, kale, radicchio and Asian greens.

Nearly all the vegetables are sold within the South Island, Mr Wycherley said.