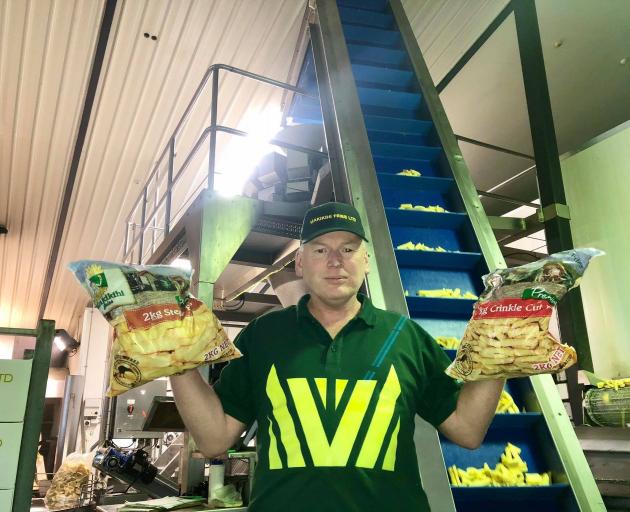 The country's $1billion-dollar potato industry is at threat of an influx from Europe, which is facing an officially declared 2.6million-tonne surplus of fries created by temporary food service closures during Covid-19 lockdown.

Mr Hydes said dumping European surplus had the potential to be a major problem.

"Our total potato harvest in New Zealand is half a million tonnes. European product shipped here would risk seriously impacting upon the local industry and jobs, which could then result in a subsequent potato shortage once the Covid-19 excess was gone."

He said Australasia would be an ideal place to ship the surplus as it was "far enough away to not impact their market and allow them to be rid of their problem".

"We know that they are being offered around and the problem is that those potatoes, once effectively having been paid for by an EU subsidy, become uncontrollable. Authorities have no control over whether a truck makes a right turn to the dump or left to the processor. They cannot supervise the dumping of 2.6million tonnes of potatoes."

He said if an importer, supermarket chain or other distributor decided to profit from a surplus, by the time potato growers and processors knew about it the product would be on its way.

"They may profiteer in cheap product for one to two growing seasons while people in the potato industry suffer."

New Zealand growers could not handle grossly unfair competition, processing capacity could be lost and then there would be potential for the whole mess to be followed by a potato shortage here, he said

"The concern among these types of things is job losses. New Zealand is already dealing with our own surplus.

"Covid-19 created a roughly two-month hole in consumption, with all food service and restaurants closed. This will create an incredibly competitive market within New Zealand and my perspective is that New Zealand has a big enough problem to deal with in our own recovery. The last thing we want to allow to happen is for someone halfway around the world to offload their problems on to ours."

With the Ministry of Business, Innovation and Employment's support they are undertaking an investigation to gather evidence of the potential import threat.

Ultimately, the New Zealand economy, job market and even consumers could be the losers.

"Some of us are on a working group with PNZ. The whole exercise now is to work with the Government. Our preferred course of action is that the Government stop the threat before it becomes a crippling reality."