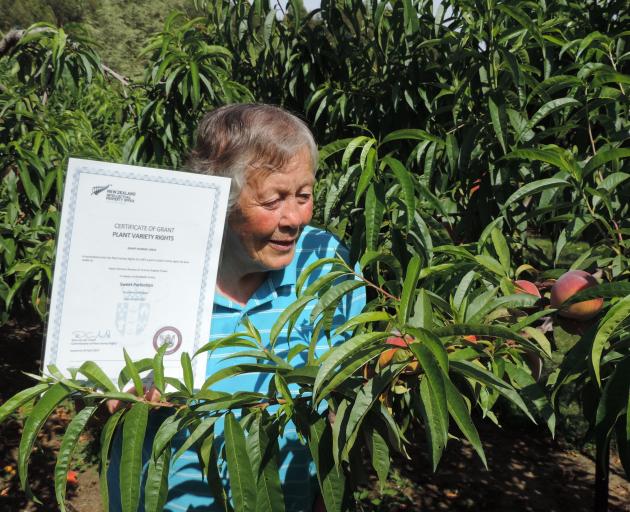 The couple achieved the feat at their smallholding at Georgetown, just east of Duntroon, in the Waitaki Valley. They have been granted plant variety rights from the Intellectual Property Office for their ''Sweet Perfection'' peach.

The orchard was more of a horticultural interest than a commercial venture, Dr Brookes said.

''We used to and still get a number of visits from organisations to see what we do here.

''We have fruit and nut trees growing well outside their natural range, including grapefruit, oranges, mandarins, loquats ...''

They discovered the peach when they arrived at their plot 25 years ago. It had grown from a stone in a flower bed at the end of the carport attached to the house.

They enclosed the area with translucent corrugated roofing panels.

Mr Fowler used to spray the peach trees with copper in winter to prevent leaf curl. However, he didn't spray the tree by the corrugated panels, as it would have turned them blue.

''After two to three years, I realised the tree didn't have leaf curl,'' Dr Brookes said.

They wanted to keep it, so they sent budwood to an Ashburton nursery to be propagated.

Once they had planted several of the resulting trees and were sure they produced the same fruit as the parent, they cut down the original from the carport.

They called it ''Peaches and Cream'' at first, because of its aroma and texture.

''It's a beautiful piece of fruit. It's really tasty.''

Its yellow flesh is juicy and freestone, and its smooth, non-fluffy skin peels off easily when ripe.

Customers bottled the peaches or ate them as dessert fruit, Dr Brookes said.

Getting Sweet Perfection recognised as a distinct breed was no mean feat. It involved three years of trials during which 50 characteristics were monitored against those of six other types of peach.

It can only be bought from Dr Brookes and Mr Fowler, and no-one is allowed to propagate it without their consent for 23 years.

Dr Brookes figured that period would outlast them.