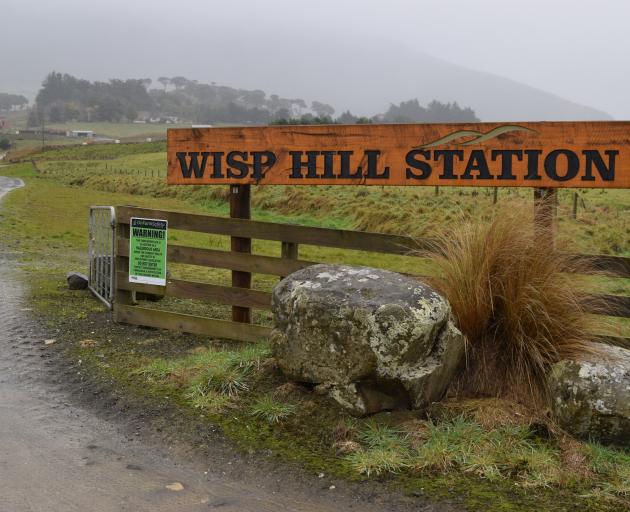 Overseas Investment Office approval has been granted for the sale of Wisp Hill Station in the Catlins. PHOTO: SHAWN MCAVINUE
Ingka Group — one of 12 different groups of companies that own Swedish furniture and homeware giant Ikea — has bought a 5500ha sheep and beef station in the Catlins for forestry development.

Following recent approval by the Overseas Investment Office, an area of 330ha at Wisp Hill, in the Owaka Valley, will soon be planted with radiata pine seedlings.

The long-term plan was to have 3000ha — more than threemillion seedlings — planted in the next five years and the remaining 2200ha would "naturally regenerate into native bush", the company said in a statement.

Otago Federated Farmers president Mark Patterson questioned the approval, saying it was "hard to see" the demonstrable benefit to New Zealand that had to be shown.

Ingka Group owns about 248,000ha of forestry in the United States, Estonia, Latvia, Lithuania and Romania.

Ingka Investments managing director Krister Mattsson said it was delighted to expand its forestry portfolio into a new country.

Wisp Hill is owned by Southland brothers Leonard and Graham Ward, who have a manager running it, and a lease back requirement would allow them to phase out their operations over a minimum three-year period.

When news spread a few months ago that an application had been lodged with the OIO, it sparked fears the productive farmland could become a carbon forestry block and force families out of the community.

It is understood the property ran about 27,000 stock units, employing both staff and contractors.

"Having a good impact in the neighbouring communities is an important part of our approach to responsible forest management.

"We will work closely with the former owners of the land and with local forestry specialists to prepare the land for a new forest to be harvested in 25 to 30 years.

"We will also work closely with the local iwi on how to best manage the land that will regenerate to native bush," he said.

Ingka Investments’ focus would be on growing the forest over that long period, which would contribute to removing carbon dioxide from the atmosphere, storing carbon and developing an ecosystem to encourage biodiversity.

"Responsible forest management, reforestation and afforestation all form part of the solution for climate change and we are committed to enhancing carbon removal through our forests," Mr Mattsson said.

The investment was in addition to plans for Ikea retail to open in New Zealand — in early 2019, the company said the big-box store would be coming to Auckland — and explore expansion opportunities across the country to make Ikea fully accessible, including stores and e-commerce.

Mr Patterson said sales of farmland for carbon farming were "a trickle that threatens to turn into a flow".

"I just think they’re asleep at the wheel from a policy perspective.

"It could be the largest land-use change in Otago for generations."

At $50 a tonne, carbon was assessed at five times more profitable than sheep and beef farming.

"Every sheep and beef farm in Otago that comes up for sale is going to be targeted by these carbon companies ... the economics are so compelling," he said.

Farmers could not be blamed for selling for carbon and it was a divisive issue among the farming community; some saw it as a property right, while others wanted to see significant restrictions imposed.

That was a "really positive opportunity" for many landowners and had downstream benefits. But with carbon forestry, it was simply "a money-go-round".

"It just feels to me we are sleepwalking into a very dangerous situation without really assessing the consequences to our local communities."

He believed the Climate Change Commission report was "totally underestimating" the potential of it.

Meanwhile, foresters were calling a proposed anti-forestry coalition of local bodies "a prejudiced step backwards in time and destructive for their communities both environmentally and economically".

Tararua and Wairoa mayors had written to fellow mayors throughout New Zealand wanting funding for a report designed to show forestry was negative and ought to be restricted, the Forest Owners Association said yesterday.

President Phil Taylor said some councils, such as the Hawke’s Bay Regional Council, were taking advantage of opportunities for forestry.

"Some councils see forestry as a good income earning investment for future generations, and doing their bit for the environment at the same time."

Regional economies stood the most to benefit from New Zealand’s move away from fossil fuels to wood-based bioenergy.

"It would be a good time for local government to do an objective analysis of land use choice and opportunities.

"Our industry would be delighted to have input into this, as I am sure would Federated Farmers and other farm organisations.

"What none of us need is a call to legislate against farmer choices based on what appears to be a set of prejudices to keep farms free of any trees."