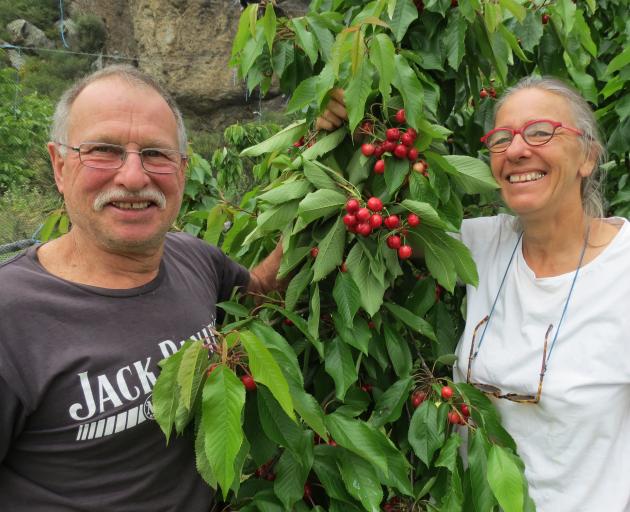 Owned by Luke and Shona Denton, they grow Lapins, Stella, Dawson and Rainier cherries, as well as the early-ripening Burlat.

However, about half their crop of Burlat was damaged and split by last week's rain, but they had several later-ripening varieties to come.

The couple only sell their fruit domestically, including at the Otago Farmers' Markets and on a ''pick your own'' basis.

''The weather has been difficult this last week or we would have been there, [at the market] but maybe next weekend,'' Mrs Denton said.

Mr Denton is originally from Northern California, and Mrs Denton is from Clyde and they first planted their 1.2ha orchard near to the Frog Peak tor on Grovers Hill, about 28 years ago.

Although they are not an organic operation, they focus on low chemical inputs.

''We do minimal spraying, and mow everything, rather than use Roundup,'' Mrs Denton said.

''We use horse manure as compost.''

Mr Denton said they did not frost-fight as it tended to leave the trees with wet feet, which was not good for them.

Although their trees are covered with netting, birds are a problem, which is where their two dogs come in handy.

In addition to cherries, they also grow garlic, and have chickens and ducks.

In addition to offering ''pick your own'', they also use woofer (World Wide Opportunities on Organic Farms) workers, or bring in pickers, including friends and family.

They teach the pickers to grade while picking.

''A lot of people had never picked cherries before and they go away knowing how to do it,'' he said.

Mr Denton said they used to have about 30 beehives until recently, but were now down to two.

''I sold the beehives to be able to start building a hot rod,'' he said.

''It is a T-bucket, a genuine Flathead Ford V8.