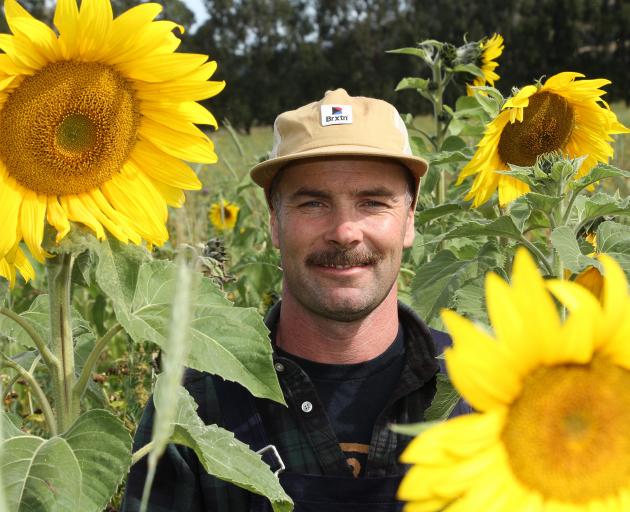 They are also looking forward to see their first Normande-cross calves on the ground in August.

Mr Anderson said he had sown 50ha using a pasture mix of sunflowers, kale, plantain, phacelia, vetch, buckwheat, various clovers including Persian clover, oats, ryecorn, prairie grass and linseed to create a polyculture rather than the monoculture like ryegrass.

''We are trying to get away from a wintering system where the bare ground is left in a mess,'' he said. 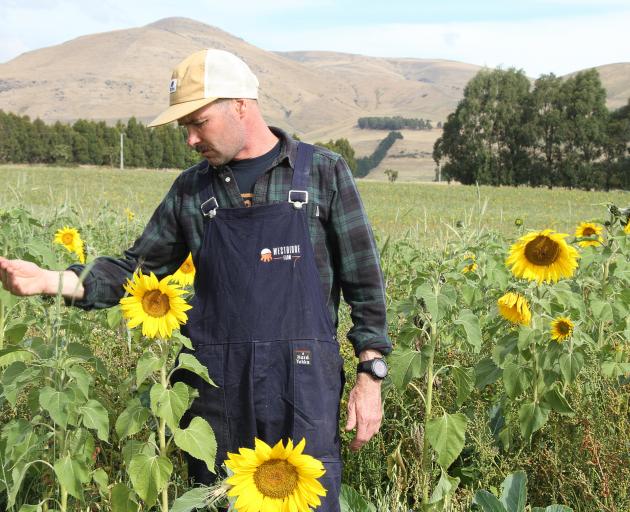 Waiwera Gorge dairy farmer Mark Anderson has sown sunflowers as part of a pasture seed recipe to grow an alternative polyculture forage.
Working with Advance Agriculture, he has been developing the pasture mix recipe for four years but started adding sunflowers about two years ago.

''All the seed we source is bare seed [untreated] as we are trying to harbour beneficial life, not suppress it and create healthy environment for plants.''

While the kale provides the fodder, sunflowers have good, strong roots that penetrate deep through the soil, which encourage rainwater to infiltrate deeply.

The seed mix also encourages biodiversity and healthy soil, and attracts more organisms above and below ground.

Bees loved the buckwheat and phacelia, as well as the other plant flowers, while buckwheat was good for scavenging phosphorous and calcium.

The companion planting root systems held the soil together through the winter months, and prevented nutrient leaching as well as taking carbon out of the atmosphere.

He wanted to avoid using pesticide sprays as well as artificial fertilisers, preferring to use a liquid seaweed mixture instead.

He said the cows grazing the mixed species seemed more content and production had gone up.

The diversity of species has resulted in the pasture growing longer, and stock is provided with a more complete diet.

He was also moving towards breeding more dual-purpose cows, crossing Friesians with Normandes.

''Normandes are quite a nice cow, and originated in Normandy, France, and they produce milk that lends itself to cheese really well.''

He was looking forward to seeing the first crop of calves on the ground in the next few months.

He said they were suitable for lifestyle blocks and sheep and beef farms.

''They have high fertility and longevity within the herd, are good foragers, and [that is] just what we want in a grass-based system,'' he said.

''They have traits that will improve both the bottom line and herd resilience,''he said