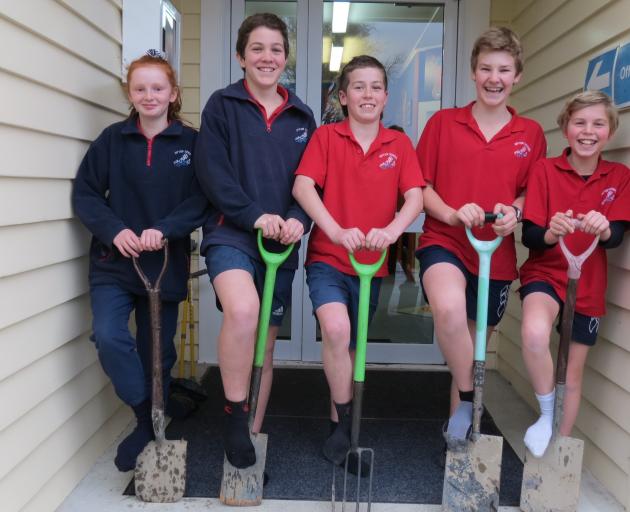 Dipton Primary School pupils are keen to spend a $500 voucher from the Plant Store in the spring. From left are pupils Sophia Watson (11), Taine Withy (13), Charlie Standish (12), Matthew Menlove (12) and Harrison George (11). Photo: Yvonne O'Hara
Dipton Primary School staff and pupils are making plans to use their $500 voucher from the Plant Store, for a planting programme for an area of wetlands at Castledowns in the spring.

The Southland Ballance Farm Environment Awards (SBFEA) offered every entrant into the awards the opportunity to nominate a school and a catchment group to go in the draw to win a $500 voucher from The Plant Store.

SBFEA co-ordinator Tracie Donelley said the draw was an incentive to attract entrants, and they would be doing the same thing this year.

Principal Richie Crean said the Menlove family nominated the school to receive the voucher and they received it earlier this year.

The Three Rivers Catchment Group won the other.

Mr Crean said the school had access to an area of fenced wetlands at Castledowns, which the owners Brian and Kristine Russell allowed them to use as a learning tool for the past nine years.

''There is a pair of native falcons there and other native birds,'' he said.

''We are looking at native shrubs and plants that will support them.

''It is a great for science, environment and social studies, and we try to take pupils up there once a term.

''We also use it for history as there are some fossils up there, including some found by pupils.''

Moa bones have also been found up there, some of which are on display at the school.

''As it is fenced, it has regenerated and it is great for the children for the environmental angles.''

They will also look at plants that will enhance the water quality and the wildlife within it.

''We have eels, crayfish and invertebrates.''

The school's other projects include a bug hotel, cabbage tree fire lighters, gardens and even daffodils in gumboots.

''We would like to see 12 entries but would be happy with nine.''

She said entries were welcome from dairy, sheep and beef, horticulture and deer operations.

Entering the awards was a simple process and each entrant's property would be judged before Christmas by a group of industry professionals, who would provide feedback.

''Our feedback reports are awesome, with relevant feedback and peer reviewed,'' she said.

She said there was a perception that entrants had to prepare a presentation similar to those done for the dairy awards, but the process was far simpler. Entrants showed judges their properties and talked about what they had done in the past and their plans for the future in a relaxed environment.

''We encourage people to enter and we can help them through the process,'' she said.