Imagine  growing grape vines in Central Otago without pumping millions of litres of water to them through millions of metres of plastic pipe. 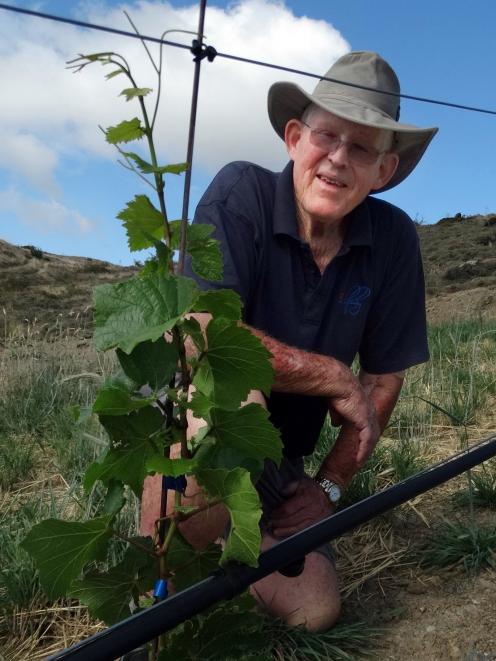 Retired viticulturalist Robin Dicey with a chardonnay vine which has withstood this year’s summer without irrigation. PHOTO: MARK PRICE
Without an irrigation system, surely they would wither and die in the heat of a Central summer.

Retired Bannockburn wine industry pioneer Robin Dicey is not so sure they would, and has begun an experiment to test that theory.

Six months ago, he and son Matt planted a few dozen vines at Bannockburn with no intention of supplying them with any irrigation water.

There have been two periods of heavy rain since then — this year at least the young vines have survived, standing green and healthy on a rocky, sunbaked slope.

"I’ve always wanted to do it. I haven’t had the opportunity. So I have brow-beaten, bullied and coerced one of my sons to make a small experiment.

But Mr Dicey is emphatic.

"It will work; there’s no question.

While the experiment could be revolutionary for the Cromwell Basin, there was nothing new about growing grapes in dry regions without irrigation.

Mr Dicey had seen non-irrigated vines in South Africa stop growing during droughts, but recover in the following season.

In the arid highlands of Spain vines grew without irrigation, although took eight years to produce their first crop of commercial proportions, compared with four years for irrigated vines in the Cromwell Basin.

Taking into account the difference in climate between Spain and Cromwell, Mr Dicey said ‘‘going dryland’’ here would mean waiting six years rather than four for a full crop; on some lighter, "more fragile" soils it was possible it would not work at all.

"One’s going to have to be a little bit selective and smart in choosing exactly what soils one does it on."

The first benefit of dryland vines would be in the savings from not installing irrigation systems through new vineyards.

"It is a vast saving," Mr Dicey said, although he admitted son Matt had installed irrigation on the small trial plot just in case the experiment failed and the vines had to be rescued.

A Central Otago vineyard is irrigated. PHOTO: MARK PRICE
There would also be a saving from not having to monitor and maintain irrigation systems, and there would be less need for some other viticulture work because the vines’ canopy would be smaller.

Perhaps even more importantly, Mr Dicey predicted dryland vines would take the quality of the region’s wines to a new level.

"The structure, the tannin, the perfume, everything will be just at a higher level if they [vines] aren’t irrigated and they have to go and explore a wider soil horizon than they are now."

Mr Dicey said that irrigation systems meant the roots of vines stayed near the soil surface.

"They wait for us to give them water, and if they don’t get water, they sulk."

Dryland vines were more resilient as their roots were "far more widespread and miles deeper".

As the roots searched for water, they would pick up minerals that would improve the grapes.

Mr Dicey said it would take longer for dryland vineyards to establish, and the quantity of grapes would be a little less, but higher quality grapes would "drive a higher price" for the wine.

"Hopefully, the quality will justify the risk and we will be able to charge a higher price on dryland farming."

The first planting of chardonnay vines was on a fairly "bony" piece of ground to ensure the experiment was carried out under the most testing conditions.

Pinot noir and shiraz vines would be added in the spring, and Mr Dicey said that right from the start, the young vines would not be watered.

He was not aware of anyone else in the region taking the gamble on dryland viticulture.

"It’s an old man’s fancy, who would really like to see it go to the next level."