Three Canterbury farmers are among the finalists for this year's New Zealand Ewe Hogget Competition.

Springston's Claire Garrett has been selected as a finalist in the Coopworth section for the second year running and has been joined by two Hawarden farming couples.

Stuart and Jo Fraser are finalists in the composite breed section, while Iain

and Jacelyn Wright are finalists in the fine wools breed section.

Being chosen as a finalist was a big surprise for the Frasers, who took over the family farm at Mt Benger, near Hawarden, only two years ago.

The Frasers' ewe hoggets were sired by a North Island-bred Romney ram and a ''Longdown'' ram bred nearby at Scargill.

''The longdowns are bred for the lambing weights and percentages, rather than the wool,'' Mr Fraser said.

''We were lucky enough to inherit the genetics going back four generations. We've never had to buy in ewes.''

The main mob of ewes was lambed at the end of August, while the hoggets lamb in mid-September, with the aim of finishing all the lambs on farm before conditions got too dry over the summer.

Mr Fraser is the fourth generation Fraser to farm at Mt Benger, since his great-grandfather bought the farm in 1923, and there were already expectations 3-month-old son Jock would continue the family tradition.

''His grandmother's already putting that on,'' Mr Fraser said.

The winners of the 23rd annual competition will be announced at a dinner at the Chateau on the Park in Christchurch on June 26.

Ms Garrett is up against Winton farmer Kevin McCallum, while the Frasers are up against Lumsden couple Trevor and Karen Humphries and the Wrights are finalists along with Middlemarch couple Andrew and Lynnore Templeton.

There are also finalists in the crossbred, Perendale and Romney sections. An overall winner and five special awards will also be presented on the night.

Ms Garrett and Mr Wright were both overseas and unable to be contacted before Central Rural Life went to print. 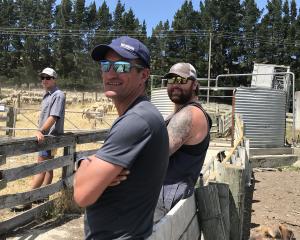