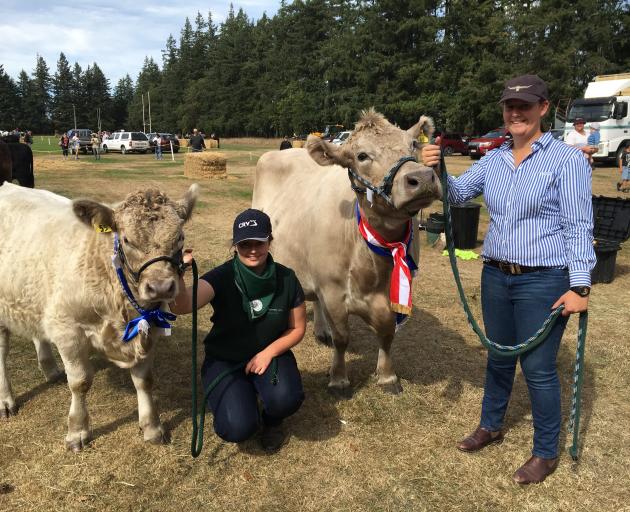 The Leeston 25-year-old has been breeding Murray Greys with George Climo, of Clarkville, near Kaiapoi, since she was a teenager.

"I was really keen to get into showing and George was the only one who replied to my email, so I ended on the team at Christchurch [show], won a trip to Australia and started my own cattle stud."

Growing up on a 4ha lifestyle block at West Melton, Ms Brooks had friends who had a beef stud where she helped out and that piqued her interest.

"I help George as much as I can and we sort of partnership really. We help each other out which is awesome.

"Definitely, I’m saving for a block so I can keep them a bit closer to home, so I’ve got to save a bit more money — and win Lotto."

The Murray Grey was a good easy calving breed, she said.

"They grow well and are really good for marking, so people using them in their dairy herds can identify a keeper beef calf and a keeper replacement heifer, so they know without having to DNA. And they’re polled, so no de-horning is required."

When she is not working with the Murray Greys, Ms Brooks works as a field consultant for CRV Ambreed.

"I help farmers with their breeding decisions with their dairy cows, so I talk cows pretty much 24/7."

While she was passionate about Murray Greys, Ms Brooks said she had a soft spot for Speckle Park cattle and would like some dairy cows too.

Working alongside Mr Climo had led to her being elected to the New Zealand Murray Grey Council, focusing on genetics.

She was keen to encourage other young people to get involved.

"Get into it. Showing is a good sport.

"Contact your local stud and come along to a show and don’t be afraid to put yourself out there."

Breeding and showing beef cattle was becoming more of "a women’s sport now", but being a young woman she still got "a few side looks".

"I do get the occasional farmer saying ‘What do you actually know?’ But you get past that and once people see you’re passionate, they give you a go."