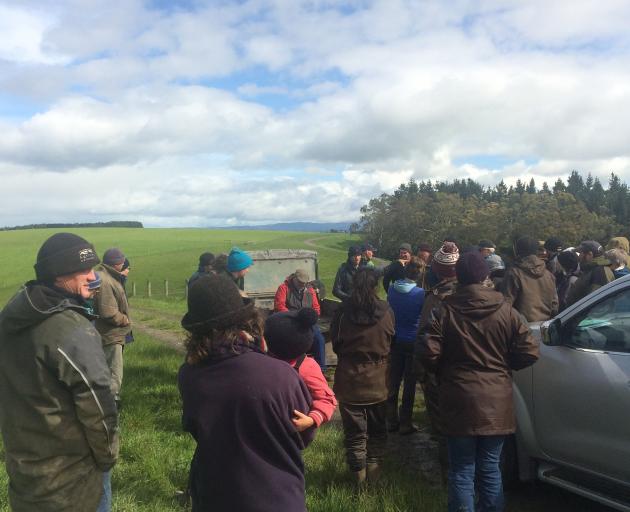 "That is a part of it — it’s the way these guys want to look after their land for future generations, but the group members are equally focused on using principles of ecology and microbiology to decrease reliance on inputs while maintaining production — therefore making the objective also about increasing profit." 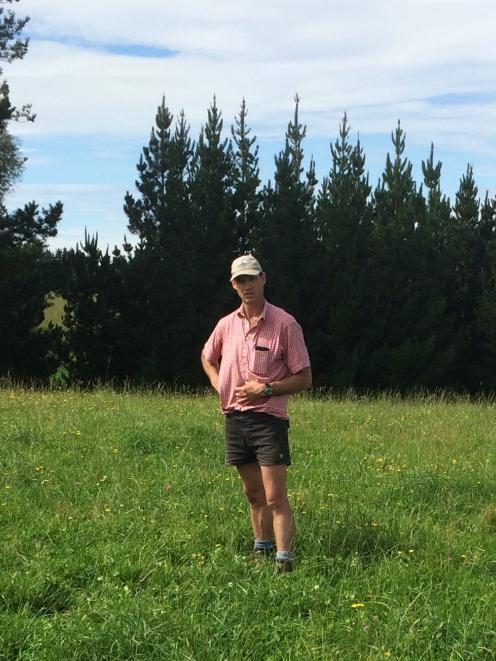 Hamish Bielski in a permanent pasture sward.
"We have made quite a lot of changes as a result of what we’ve learned through the action group and our animal performance has increased dramatically.

"We have upped the density of our mobs, cutting the number of mobs from four down to two, and we are shifting stock several times a day. We only keep animals on one area for a short amount of time, before they eat the plant too low. The regrowth is much better, without doing too much topping, and we are growing more grass."

Mr Bielski was instrumental in helping to set up the RMPP regenerative farming action groups in Southland and Otago, which launched in early 2018.

"About four years ago, microbiologist Dr Christine Jones gave a talk in Balclutha. I thought I’d go along and see what this Australian scientist is saying.

"It was compelling and I talked to her after and tried some stuff out on the farm over winter and it made sense.

"So I worked with some farming organisations to bring her back a couple of years ago and about 200 farmers turned up. From that, we had about 30 farmers who were really up for joining RMPP Action Groups focused on regenerative agriculture.

"The action group programme has been absolutely brilliant, the best farming initiative I have ever experienced, because it allows farmers to invest funding where we want to invest, not where some organisation says we should."

Mr Blackler works for chartered accountancy firm Shand Thomson and runs the Otago and Southland groups, which often pool resources and funding to maximise specialist input, including bringing in further experts from overseas.

The group, all sheep and beef farmers, selected addressing environmental issues and management, feed management and managing their soils as the overarching focuses but each member also drew up individual goals.

"The groups are all loosely aiming at the same goals, focused on reducing inputs and understanding the biological capabilities of their soil," Mr Blackler said.

"Changing their perspective on this is enabling them to use the natural strength and capacities of their land through better management, which in turn should lead to increased economic farm surplus.

"But some also want to address work-life balance too, to farm in ways that enable them to spend more time with the family or go to the beach sometimes on a good day."

This has been combined with a strong focus on finance and business strategy. After meeting initially to set ground rules and create the extension plan, one of the earlier sessions was a financial literacy workshop.

"We started the group before RMPP had launched the "Taking Ownership of Your Financials" workshop, but we brought in Gaye Cowie, one of the directors at Shand Thomson," Mr Blackler said.

"Gaye farms with her husband Nigel on their sheep and beef property and based the workshop on work she had presented collaboratively with others for the Agri-Women’s Development Trust "Understanding Your Farm Business" programme.

"We covered everything members needed to do to get their KPIs, goals and ultimately their action plans drawn up. I think everyone got a lot of value out of that and people picked up on things they didn’t know before."

They have also had site visits to members’ farms, often combined with an expert workshop, and field visits to other non-member farms undertaking regenerative agriculture programmes.

Mr Bielski says all the events have been valuable, but for his farm business, the Ian Mitchell-Innes and Siobhan Griffin input resonated most strongly.

"There are things in life that are particularly impactful and for us, it has been those two experts. Working with them changed the game for us and it has really made a difference to our business and the way we farm."

He has also altered his grazing programme significantly as a result of being in the group. His farm business is also reaping benefits in terms of reduced input costs and increased plant growth, and he says the process has reignited his passion for farming.

"It has been amazing," he said.

"The first year here I had cull cows and they caused compaction. I was struggling to get seed contact. I began experimenting with some of the approaches we’d learned about and I started getting results quite fast. This year I doubled my calf and beef numbers and kept the sheep the same.

"I’m also making my own fertilisers now, although I prefer to call them carbonisers — and have cut my fertiliser input costs by 80%. I’m sourcing bio-products from industry which they would otherwise have to pay to dump and I’m making so much that I’m supplying six of my mates too.

"We hadn’t had this farm that long and it was pretty run down but we’re watching the place come alive. Before the action group, I was struggling and ready to walk away from farming but now I can’t wait for next year."

Mr Bielski and Mr Forde both agreed facilitation had been key to the success of the group.

"Facilitation has been awesome. Tim [Blackler] totally understands what we are working to achieve and is genuinely interested and invested in supporting us in that," Mr Bielski said.

Both also cite the peer-to-peer learning and supportive nature of the group as having a huge role in building members’ confidence to try new approaches.

"I think a lot of us were a bit sheepish at first — we were going into something unknown to us. But now we have a great friendship across the action groups in Otago and Southland.

"We support each other professionally and we do social stuff. I had been looking at doing something like this on different farms for 10 years and playing around with sending my soils for analysis but this has accelerated everything because we are trying stuff out and sharing what we have done and learning from each other’s successes and mistakes. Tim has been a very big part of that. He is very approachable and he helped us set the guidelines and has supported us in the direction we have taken," Mr Forde said.

Mr Bielski said the topic of regenerative agriculture could be be polarising.

"You do get people who aren’t happy about you doing it, so it has been very good to have a group of people who are all encouraging and supporting one another. In anything new, there will be failures, and we share those, but we also share our successes. That helps us gain confidence, and once that happens, things start to snowball — we are moving forward together.

"These are early days. We want to give it another three to five years before we say ‘yes, this can be scaled up and it truly does work’. It’s working amazingly well so far, but you have to repeat that year after year.

"The timing of the action group was perfect, coming at a time when there is pressure on farmers around the environment. Our hope is that we have found a way to meet those requirements while also growing food in such a way that families don’t have to pay more for it."