By Mark Price
0 Comments
The world’s best exponents of the art of ploughing are coming to Lake Hawea, but not for quite a while.

An Upper Clutha group of ploughing enthusiasts announced on Saturday they had secured the 2028 world championships.

That means 60 of the best "ploughmen" from farming communities around world will load up their tractors and ploughs, ship them to New Zealand and carve out furrows across the flat paddocks south of the lake.

Organising committee chairman John Osborne said his committee had spent two years preparing Lake Hawea’s case for the event, "basically trying to prove to the New Zealand executive we have facilities up here to have all these world guys here".

Bruce Johnston (left) and John Booth, of Ashburton, drive the only horse team at the Lake Hawea Ploughing Association event on Saturday. PHOTOS: STEPHEN JAQUIERY
Lake Hawea was chosen ahead of a Waikato proposal.

Mr Osborne said Lake Hawea had enough suitable ground to run the event and had all the other facilities required.

"We proved to them we have farmland to plough, we’ve got accommodation, we’ve got tourist attractions to do.

"Basically we have just got a good infrastructure to have it."

On Saturday, dozens of South Island competitors ploughed up land near the lake and seemed satisfied with what the Hawea soil had to offer.

The world championships will be held in April 2028, and Mr Osborne said there was a lot to organise before then, with about 400 individuals involved in the competition.

Each ploughing team consisted of five people — two ploughmen, a judge, a manager and a coach. 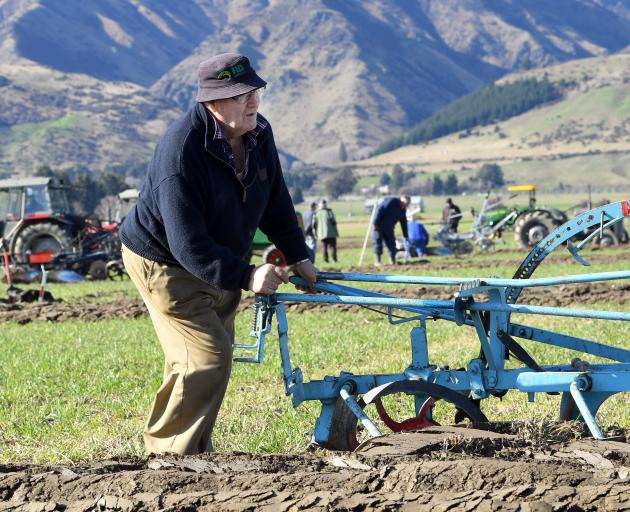 Tom Fowler (86), of Tapanui, uses a plough manufactured by his family some time between 1870 and 1900.
As well, Mr Osborne expected teams of supporters.

"There are a lot of people around the world who follow the ploughing."

This year’s world championships were to have been held in Russia, but have been rescheduled for next year because of Covid-19.

The last world championships to be held in New Zealand were at Methven in 2010, and in 1994 they were held on the Taieri Plain, near Dunedin.

The 2010 world champion, Bruce Redmond, of Methven. said doing well in competitions required commitment and practice, with the aim to get all the furrows straight and even.

Mr Redmond said a few young people were getting involved, but a lot more would be welcome.