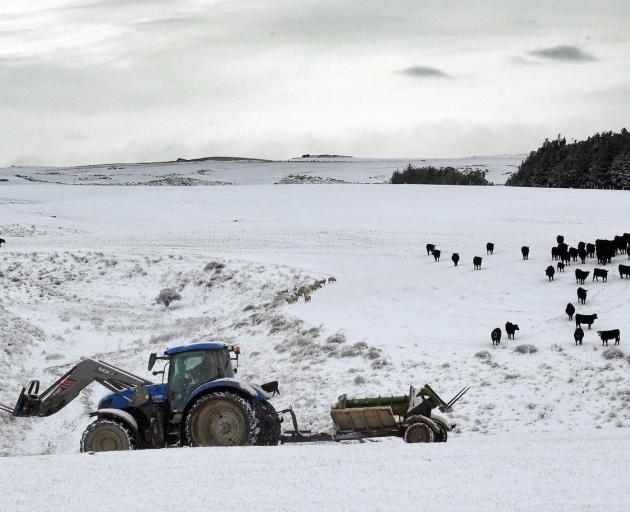 Cattle head to Logan Hall's tractor as he feeds out at Black Rock. PHOTO: STEPHEN JAQUIERY
Last spring was a "perfect storm" for farmers, and this spring Otago and Southland farmers are urged to prepare feed budgets so they are better prepared to deal with any feed deficit that might occur in the next few months.

He encouraged farmers in Otago and Southland to do their feed budgets now so they could address any deficit by getting rid of stock or buying in more feed earlier rather than later.

North Otago is looking drier than usual, the Maniototo has had a decent season and it is quite mild in Southland, where there has been good grass growth.

However, many farmers had started feeding out winter crops sooner than normal, which could leave a deficit.

He thought lamb survival was likely to be up this year and he encouraged farmers to plan for feed deficits, as it would take about six weeks to fill any hole.

There was too much rain last spring, which meant difficulties getting winter crops established, and then a lack of sunlight slowed growth.

"There is not the same amount of germination, so the yield was down with not as much silage and baleage made.

"In addition there were hold-ups at the works for getting rid of cull cows and lambs off farms.

"Those animals had to stay on farm longer and some farmers had to start using winter crop in April rather than mid-May."

"That diminished many of the potential feed issues leading into winter.

"There are still farmers who are responding to the feed issues created in autumn, but these are small in number compared to what was anticipated.

"Many farmers reacted very well to the Covid-created procurement issue.

"Autumn nitrogen and gibberellic responses were better than anticipated and farmers seem very thankful for that."

Omakau sheep and beef farmer Donny Maclean said it had been a pretty good winter and last week’s snow had not worried him and the moisture would get the grass moving.

"It was only one day and we are due to start lambing until September 15.

"I am still waiting for the grass to grow.

"I am still feeding out hay and baleage, rather than feeding on crop, and I am hoping that I will be bang on."

Pourakino Valley sheep and beef farmer Geordie Eade said they were still a week away from the start of lambing and had not had snow.

"The winter has been fairly cold but drier.

"We have an average rainfall of 1000ml for the year and I am looking for to a dry lambing compared to last year, which was particularly wet for hogget lambing going into October.

"Now, with the mild conditions last month, everybody is where they should be."

DairyNZ regional leader Southland Ollie Knowles said the winter had been relatively kind to farmers, putting farmers in a better position than could be expected in past years.

"With regards to growth, what we have experienced through May, June and July they were not so much the traditionally wet winter [months] we usually experience down here."

Feed and growth rates were relatively good at this stage, and while there was a range of feed situations at the moment, a few farmers still tight, others were reasonably happy.

Farmers were advised to start thinking about shutting up paddocks and create surpluses.

There had been a few frosts last week, which slowed growth rates.