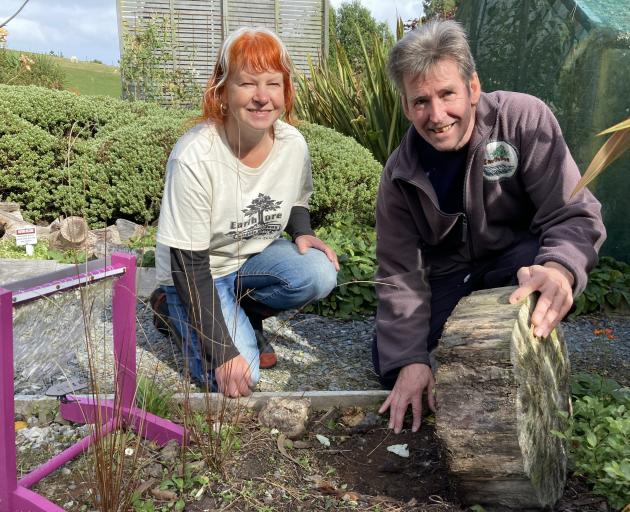 The global decline in bugs.

In what has been described as a worldwide insect apocalypse, one study estimates that we’ve lost 76% of insect biomass over the past 27 years just because of the way we’re producing food.

However, the Thompsons, who own insect sanctuary Earthlore, near Owaka, in the Catlins, say that anyone can take some simple steps to bring back the bugs into their gardens and pastures. It comes down to providing them with the basics that all living things require: food, shelter and water. 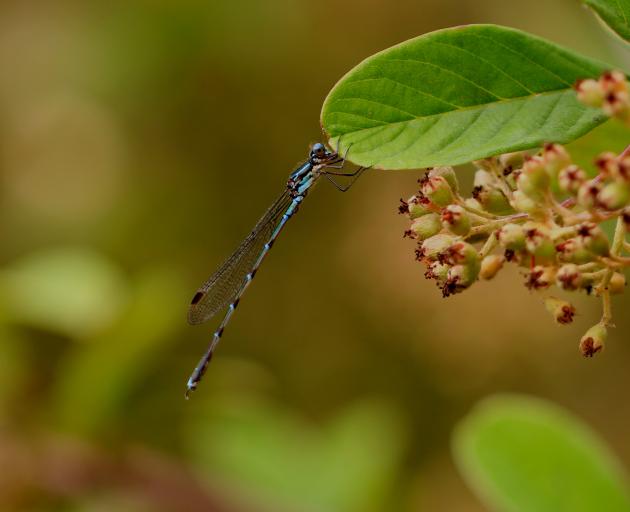 The blue damselfly — gorgeous creatures to have around, plus they have a voracious appetite for an assortment of flies, including mosquitoes and midges.PHOTO: JANINE THOMPSON
Mr Thompson, who is originally from Kurow and a rural background, said leaving some logs or pieces of wood to rot on the perimeter of paddocks or the garden would attract the right sort of insects, such as the metallic green ground beetle by giving them somewhere to live.

His love of bugs and self-taught expertise in insects led to the creation of his alter-ego Inspector Insector, a sort of eco-warrior who explains in a child-friendly way what causes loss of insect life. The character and creative visuals all around the Thompson garden at Earthlore are the result of Mr Thompson’s graphics and screen-printing background.

"Olearia hectorii used to be common in the Catlins and now it’s endangered. It is the host of 12 [insect] species, so that means 12 endangered invertebrates. So, if the tree disappears, so do the insects, therefore the food chain collapses.

"They’re a really good farm tree because they bring in the insects and they are native to the south."

Mrs Thompson grew up in a horticulture and garden-loving family in Dunedin and eventually made a career out of it by working in garden centres.

She encouraged all gardeners and farmers to "keep some boundaries wild and with an unsprayed border".

"That will provide shelter and habitat for insects."

She advised putting shallow trays to collect water around the garden or paddock "filled with gravel, so that insects have something to climb on to, because without that, they’ll drown".

"Bees for instance, they’ll fly three or four kilometres [from their hives] and they need a lot of water."

Farmers could also put rocks in water troughs, to give bees and other insects "islands" to drink from.

People needed to change their perception of insects, the Thompsons said.

Insects carried out five crucial functions that were essential to life on earth, such as providing a food source, acting as decomposers, pest controllers, pollinators and soil conditioners.

"Most people look at insects as pests, but only about 3% are actually pests," Mrs Thompson said.

This would include the grass grub and porina caterpillar.

Native to New Zealand and usually feeding on tussock, porina increased when pasture increased but they also provided a wealth of food for birds. 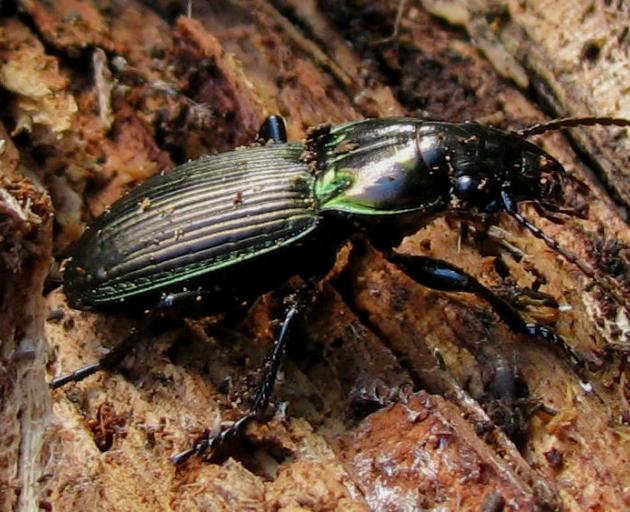 The metallic ground beetle does a great job of cleaning up unwanted pests and plays a vital part in the food chain.PHOTO: JANINE THOMPSON
Agriculture tended to create monocultures — large areas planted in the same crop — and the pests soon multiplied in the presence of easily-obtained feed, she said.

"And if you don’t have diversity of other habitats, you bring in the pests, and those pest numbers will explode."

The Thompsons have created different mini-habitats, such as a wetland, to bring in desirable insects, for instance dragon flies and damsel flies that eat mosquitoes.

Their tussock land brought in butterflies, such as the increasingly rare tussock ringlet, which brings in nectar and food for bees.

To get the land back in balance, people had to be patient, Mr Thompson said.

"It could take three to four years, and to make a real difference it could take 10 years."

And that would also include the re-establishment of trees.

"What would gladden our insect and bird loving hearts would be more corridors for wildlife," Mrs Thompson said.

"That would create habitat. What you need is a food source and shelter and a host plant, so plant as many species as you can."